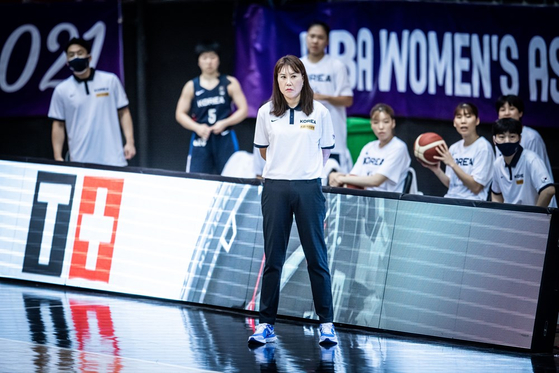 
The women’s basketball team will play two friendlies against the Latvian national team at Cheongju Gymnasium in North Chungcheong on Friday and Saturday.

This is the first time that the women’s basketball team has invited an overseas team for a friendly, hoping that this will serve as a warm-up opportunity for the national team as they are scheduled to compete in the FIBA Women’s Basketball World Cup this September.

However, the national team is currently not in the best shape.

Two players, Bae Hye-yoon and Lee Hae-ran, are out with injuries, while ace player Park Ji-su will not be playing the friendlies after she was diagnosed with early stage panic disorder.

Last month, Park reportedly left training with her WKBL team the KB Stars and was taken to hospital because she was hyperventilating and showing signs of a panic attack.

This comes as a big loss for the national team, as Park is the only player active in both the Women’s Korean Basketball League (WKBL) and the WNBA.

The Korea Basketball Association has not replaced Park on the national team roster, leaving head coach Jung Sun-min to call up 15 players instead of 16 at Jincheon National Training Center in North Chungcheong.

Of those 15 players in Cheongju preparing for the friendlies, one has now tested positive with Covid-19.

“We still need to prepare if things are not looking good,” said head coach Jung. “We are currently training very hard and doing everything that we can do. The players are especially very passionate.”

“I watched the friendlies and Latvia played well. I think it’s undeniable that they are a better team than us,” said Jung.

“But we should encourage the players to focus on their own strengths and prepare as well as possible. Park Ji-su is the only player who can play under the basket so it’s important to strategize how to utilize the other tall players.”

The 12-woman roster for the World Cup will be finalized after the friendlies. With Park’s condition unclear, the Korea Basketball Association had said on Aug. 4 that it is considered unlikely that she’ll be able to play at the World Cup.

“I have a vague outline for the entry,” said Jung. “The roster will be finalized after the two friendlies. The friendlies are a good opportunity for us to assess the players. I don’t want them to feel too much pressure as our focus is on the World Cup. I just hope that this is a good learning opportunity for the team.

The first friendly is at 7 p.m. on Friday and the second will be held at 7 p.m. Saturday.

At September’s FIBA Women’s Basketball World Cup, Korea will first face China on Sept. 22, then Belgium on Sept. 23, Bosnia and Herzegovina on Sept 24 and the United States on Sept. 26. Korea’s last group stage match will be against Puerto Rico on Sept. 27.

Drama series ‘Extraordinary Attorney Woo’ to be made into a musical