Yoon promotes ‘digital transformation’ at B20

Yoon promotes ‘digital transformation’ at B20 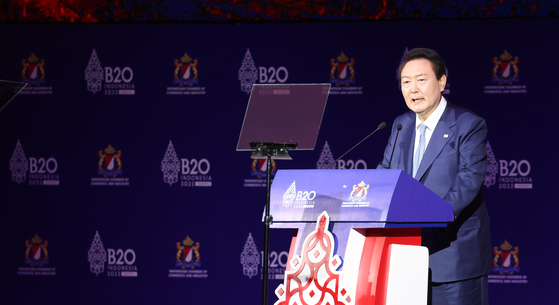 President Yoon Suk-yeol delivers a speech at the B20 summit at the Bali Nusa Dua Convention Center in Indonesia on Monday, ahead of the G20 summit Tuesday. [YONHAP]


President Yoon Suk-yeol stressed that the key to overcoming the global economic crisis can be found in “digital transformation” at a business summit of G20 leaders in Bali Monday.

“I believe that digital transition is the key to supply-side innovations led by the private sector in the current global environment,” said Yoon at the B20 summit, a business meeting of the Group of 20, or G20, countries at the Bali Nusa Dua Convention Center.

After a three-day visit to Phnom Penh, Cambodia, Yoon and first lady Kim Keon-hee arrived in Bali, the final leg in a two-country trip to Southeast Asia, late Sunday to attend a series of business events and the G20 summit hosted by the Indonesian government.

At the B20 summit Monday, Yoon said that the current economic crisis was “caused by supply-side shocks rather than demand-side factors.”

“During the recovery from the pandemic, supply chain disruptions and an array of geopolitical conflicts have driven up production costs and reduced supply capacity,” said Yoon. “Accordingly, a solution to the current crisis must come from the supply side, while the government role also must be redefined.”

He stressed that the market-driven private sector should play a central role in transforming economic systems.

“It is in this context that efforts are underway to drastically overhaul regulations that hinder corporate investment and foster an enabling environment conducive for doing business,” Yoon added. “I believe we should drastically cut unnecessary government spending, restore fiscal soundness and ensure that finances do not crowd out the private sector.”

The Korean government, said Yoon, is significantly increasing research and development investment in science and technology and nurturing talented professionals in high-tech industries.

He said that the process of combining digital technologies with existing industries and data “lead to cost reductions, generate added values and create new businesses.”

Yoon said that to ensure that digital companies are not held back by regulations from the analog era, Korea is enabling a business-friendly regulatory environment based on self-regulation.

“We hope that the B20 will be at the center of establishing a digital order that can be accepted by all of humanity so that the benefits of the digital era can be shared across borders, without excluding anyone,” he said. “The Korean government will lead discussions at the G20 level for the establishment and implementation of a new digital order through close consultations with the B20 and the G20.”

This year’s B20 summit, launched in 2010 at the G20 summit in Seoul, was organized by the Indonesian Chamber of Commerce and Industry. The Federation of Korean Industries attends the B20 annually. 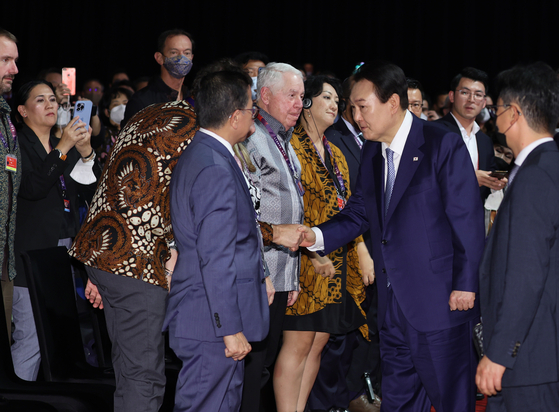 President Yoon Suk-yeol, right, greets people after giving a speech at the B20 summit at the Bali Nusa Dua Convention Center in Indonesia on Monday. [YONHAP]

In Cambodia, Yoon attended a series of Association of Southeast Asian Nations (Asean) meetings including the East Asia Summit.

On Monday, focused on economic diplomacy, Yoon had a luncheon event with Korean entrepreneurs. He was later scheduled to attend a Korea-Indonesia business roundtable. Yoon was also expected to discuss with Indonesian President Joko Widodo ways to enhance bilateral economic cooperation.

At the G20 summit Tuesday, Yoon was expected to make an address in a session on food, energy, and security and another on global health.

There is interest to see if Yoon will have any interactions with Chinese President Xi Jinping, who will also be attending the G20 summit. Xi and U.S. President Joe Biden were set to hold their first summit Monday.

In Bali, first lady Kim skipped official events for spouses of leaders attending the Asean meetings to discuss finding treatment for a Cambodian child with a heart disease.

During her time in Phnom Penh, Kim made two visits to the Hebron Medical Center, which was established by a South Korean pediatrician, once on Friday and again Sunday, said the presidential office in a statement.

Kim, according to the office, heard about the difficulties facing 14-year-old Ratha, who underwent heart surgery at the hospital in 2018, and learned that his family was unable to pay for another heart operation. She visited his home on Saturday. Ratha’s father died before he was born and the mother and older brother are also in poor health. Ratha recently underwent brain surgery and is malnourished.

Since the visit was publicized, the medical center received calls from Koreans offering to pay for Ratha’s transportation to Korea and treatment.

“After Rotha’s story became known, inquiries for domestic support flooded in,” said a presidential spokesman Sunday, adding that “a path to save his life has opened up.”

Kim attended other events in Cambodia with Yoon, such as a dinner on Sunday hosted by the Cambodian government where the couple was reunited with Biden.

Yoon and Kim wrap up their six-day visit to Southeast Asia on Tuesday and will return to Seoul early Wednesday. 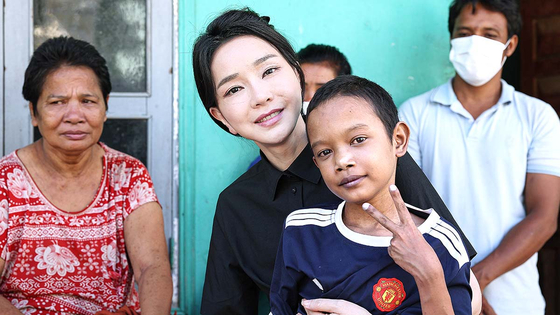 First lady Kim Keon-hee takes a photo with a 14-year-old boy suffering from congenital heart disease at his home in Phnom Penh, Cambodia on Saturday. She visited a local medical center twice during the trip to Cambodia to discuss ways to treat the boy. [PRESIDENTIAL OFFICE]