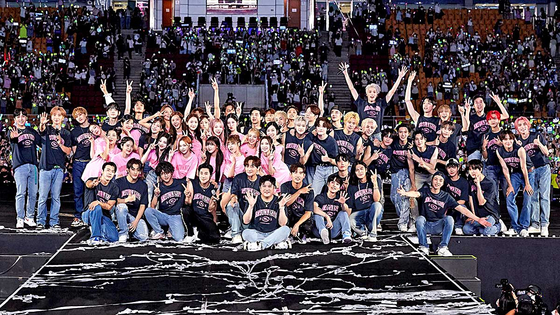 
Game publisher Com2uS acquired a 4.2 percent stake, or 990,000 shares, in SM Entertainment for an undisclosed amount, the company said Tuesday.

The investment is “not because the company wishes to tilt SM Entertainment in its favor,” but because it believes that “SM Entertainment is being under-valued and has a high growth potential for the future,” according to a Com2uS press release.

SM Entertainment’s stock prices have fallen by over 20 percent since the company peaked at 90,000 won last April, upon worsening market conditions and the absence of a hit song from its artists.

“SM Entertainment is one of the best entertainment companies that have led to the popularization of Korean popular culture around the world,” the company said. “It has sold foundations with a 700-billion-won revenue and 130-billion-won net profit in 2021 and holds the most diverse artist portfolio among K-pop agencies.”

The partnership will give Com2uS a chance to bring its technologies together with SM Entertainment’s intellectual properties (IP), especially in computer graphics and special visual effects. SM Entertainment has also been readily using visual technology in recent years, such as through holding online virtual concerts during the pandemic.

In September, SM Entertainment saw its shares soar 19 percent in one day when it announced it would sever ties with a music production company 100 percent owned by chief producer Lee Soo-man.

SM Entertainment announced Sept. 15 that it will terminate its contract with Like Planning, a music production company wholly owned by Lee, by the end of this year.

Founded in 1997, Like Planning is a music production and consultation company that has been taking 6 percent of SM Entertainment’s revenue in return for its insight in making SM artists’ music.

The company has been signed with SM Entertainment for 20 years and was paid 11.4 billion won during the first half of this year. The ongoing contract lasts until December 2023, which would have been automatically renewed had there been no objections.

SM Entertainment shares closed 5.9 percent down from the previous day, at 66,900 won.