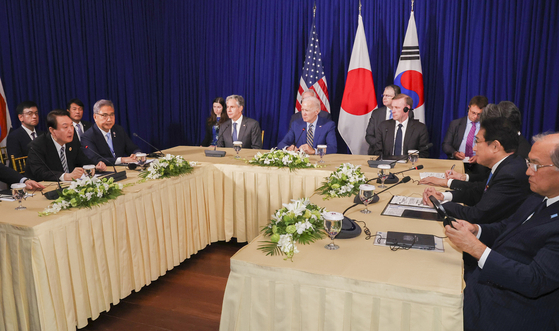 
South Korea and Japan must work closely together bilaterally and also trilaterally with the United States to deal with the various challenges at hand such as North Korean provocations and supply chain resiliency, the countries’ top envoys in the U.S. said Monday.

South Korean Ambassador to the U.S. Cho Tae-yong said the Seoul government stands ready to strengthen its cooperation with the United States and Japan.

“This is a natural outcome of a more aligned threat perception,” he said of the joint exercise while speaking at an annual seminar hosted by South Korea’s SK Group. The seminar, titled “Trans-Pacific Dialogue,” was held at a resort in Virginia, attended by SK Group chairman Chey Tae-won and many others, including Japanese Ambassador to the U.S. Koji Tomita.

“Security remains our core issue that is demonstrated by the threat posed by the DPRK,” the Japanese diplomat said of trilateral cooperation, referring to North Korea by its official name, the Democratic People’s Republic of Korea.

Tomita said North Korean provocations were the reason why the three countries “stepped up” their efforts to strengthen their capabilities, and also improve U.S. extended deterrence.

“But I also look forward to deepening our policy dialogue to greater alignment of security,” he added.

Cho reiterated the need to enhance trilateral cooperation for economic security as well.

“After the pandemic and widespread disruption of supply chains, the world is turning its attention to building stable, reliable and resilient supply chains,” the South Korean diplomat said.

“Hence the time is right,” he added, for creating a trend of economic collaboration between the countries.

“Trilateral dialogue can help create synergy in these efforts,” he insisted.

Cho said Seoul stands ready to strengthen its trilateral cooperation with the United States and Japan.

“I can tell you that the Yoon Suk-yeol government is prepared to strengthen our contribution to the trilateral cooperation among the United States, [South] Korea and Japan, and I hope that this will have a huge impact on building a rules-based order in the Indo-Pacific region, an area where Japan, Korea and the United States have a huge stake in,” he said.