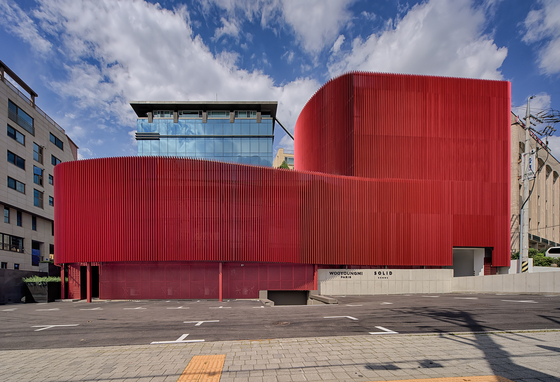 Serving as an office for her two fashion brands, Solid Homme and Wooyoungmi, the space celebrated its official opening on Dec. 1 with an exclusive evening reception party with celebrities, influencers and Woo in attendance.

The piercing red, six-story building stands conspicuously in the otherwise regular neighborhood of Guui-dong, which is where a wedding hall used to be. Most of the building’s exterior is covered in louvers, which are horizontal window blinds that allow some sunlight and airflow, but keep out rain. This architecture style originated in the Middle Ages. 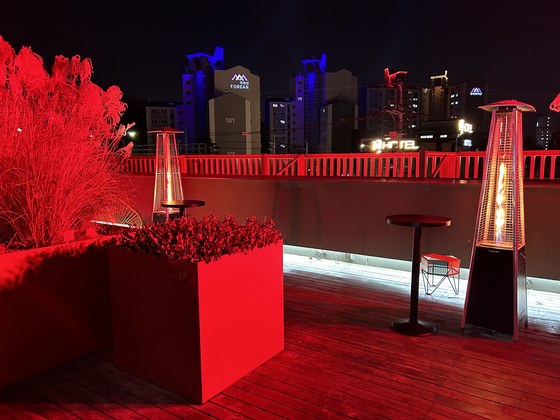 
The red concept continues throughout the inside, especially on the terrace, which is lit with heavy red lighting.

“I didn’t really like the color red before,” Woo told the Korea JoongAng Daily. “But at one point I felt this connection with red and realized that I need that color. It’s like when people feel this sense of deficiency they try to fill that void; I am incredibly drawn to red because it is necessary to me. From a few years ago I’ve been actively using red in the interior of our stores or packaging.”

The first floor is an archival library related to Woo’s collection, filled with books, magazines, documents and awards, to “provide inspiration” to the staff. A portion of the space is designed as a walk-in closet, with an exceptional array of colorful clothes hung on racks, that also act like an archive.

“We really put emphasis on the exterior walls, but we made an effort with the first floor as well,” Woo said. “It’s a library dedicated to the entire history of the brand. Our crew members freely borrow the things on display, with hope that it helps them think creatively and outside the box.” 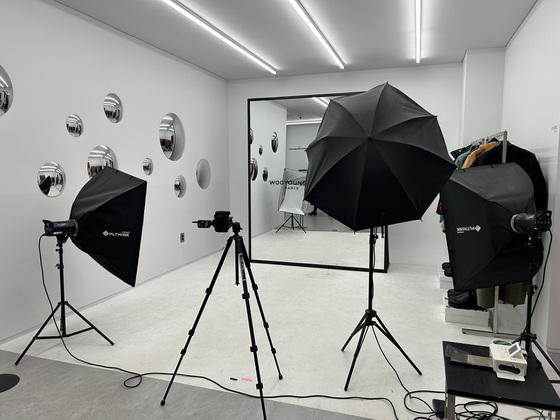 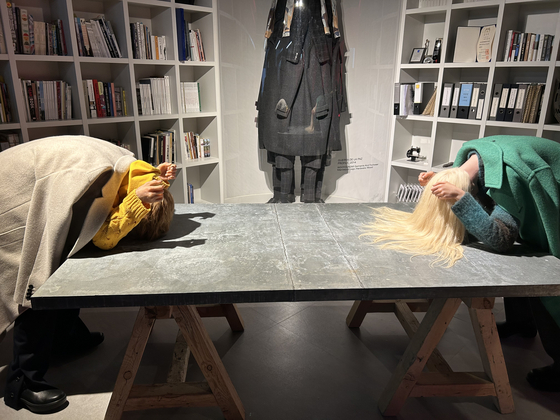 Two lifelike mannequins that are bowing to each other on opposite sides of a table. The one wearing an ivory coat embodies Solid Homme and the other wearing a green coat represents Wooyoungmi. [SHIN MIN-HEE]


Two lifelike mannequins that are bowing to each other on opposite sides of a table are particularly eye-catching. The one wearing an ivory coat embodies Solid Homme and the other wearing a green coat represents Wooyoungmi.

Through the years, Woo has consistently said that the two brands are like her “sons.” This specific piece sees the Solid Homme figure as a male and Wooyoungmi figure a female, and “expresses them trying to change each other’s clothes,” Woo explained.

“Although these two brands started out centering on menswear, we ultimately strive for an androgynous closet. We aimed to illustrate our brands’ philosophy with the mannequins’ gestures.” 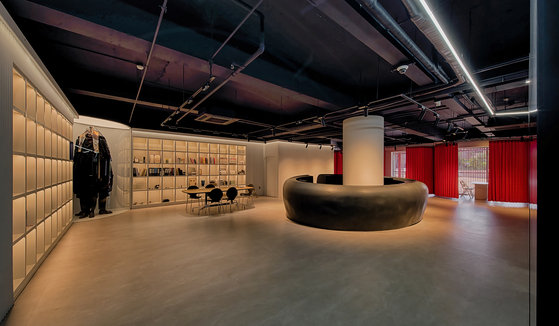 The first floor of House Wooyoungmi is an archival library. [SOLID CORPORATION]


Woo forayed into the fashion scene after launching Solid Homme in 1988 as Korea’s first female designer to specialize in menswear. In 2002, she expanded her clothing line overseas, debuting her second brand Wooyoungmi in Paris.

In 2020, Wooyoungmi ranked first for the year in sales for menswear at Le Bon Marché, a department store in Paris.

Over the years, Woo’s collections have been a celebrity favorite, with stars like Lee Byung-hun and Kang Dong-won sporting the garments. Actors Lee Min-ho and Kim Woo-bin, who starred in the SBS drama series “The Heirs” (2013), previously wore her outfits on the show as well.

Woo said during a guest appearance on tvN’s variety show “You Quiz on the Block” (2018-) that Kang walked the runway for her Paris collection back in 2002. 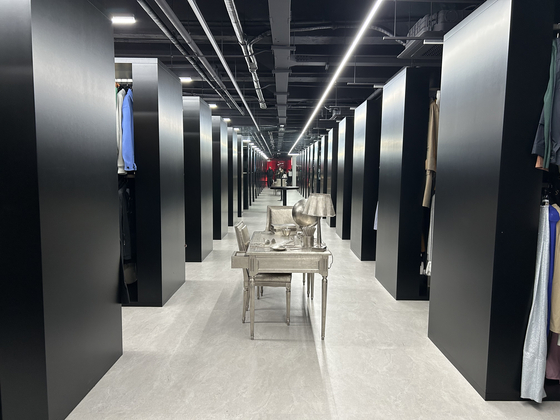 The hallway on the first floor of House Wooyoungmi, is designed like a walk-in closet. [SHIN MIN-HEE] 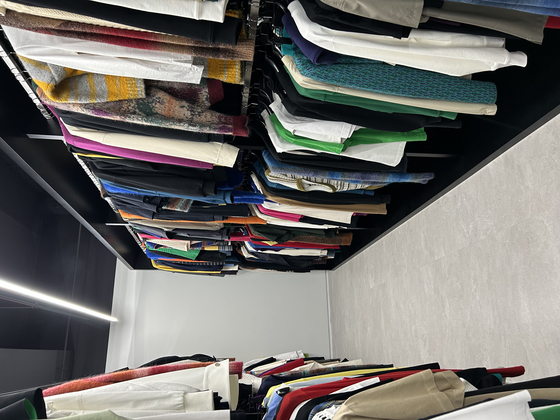 One of the many clothing racks on the first floor of House Wooyoungmi, filled with designer Woo’s past collections [SHIN MIN-HEE] 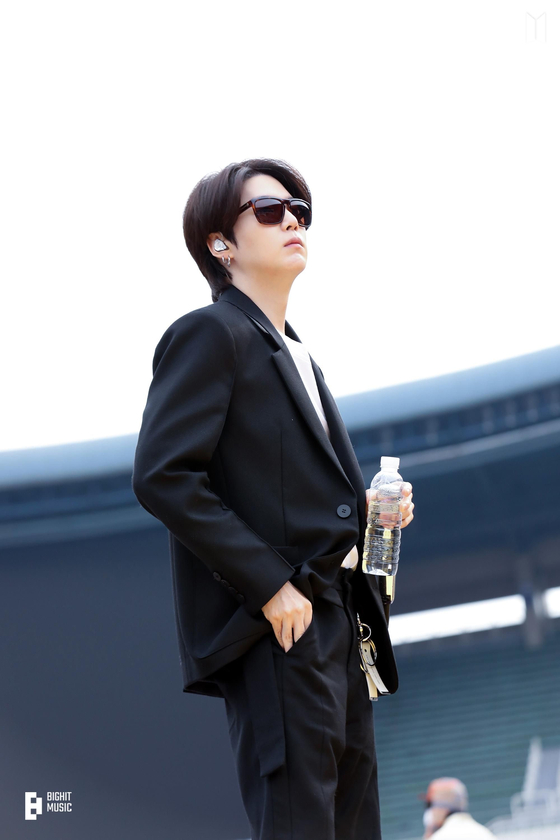 BTS’s Suga is another well-known fan of Woo’s menswear, frequently wearing her pieces in videos or on trips to the airport. In an interview with fashion magazine Hypebeast early last month, Woo said that Suga was a guest at her daughter’s wedding, “fully dressed in Wooyoungmi from head to toe […] to prove to [her] how much of a fan he is.”

“We started searching for a new building [in Korea] and imagined a place that would be the right fit for fashion design,” Woo said. “My longest dream has been to create a building that will stimulate the mind, encourage a flow of energy and elicit evolutionary thinking. I’m so happy to finally achieve this.” 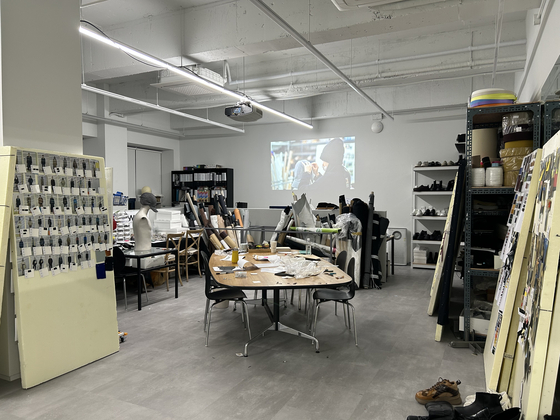 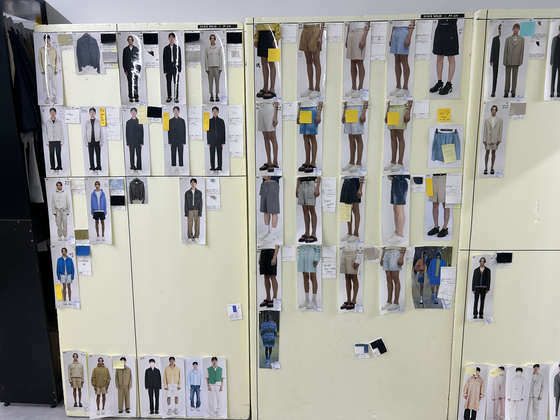 
Woo says it was important that the new space will be optimal in fostering both Solid Homme and Wooyoungmi’s future and that it should be a large space.

Even though she is the CEO of Solid Corporation, which houses both brands, she decided to house her office on the second floor rather than the top sixth floor so that it would be more convenient to converse with her employees.

“We even considered having the new building on the outskirts of Seoul as it would need to allow the entire team to gather around and look at the latest collection and be able to have a discussion, cool off and even act as an archival storage,” Woo continued.

“It wasn’t easy, but we decided on Guui-dong. After seeing this area, I knew it was the place for us.”

Korean design jumps on the K-history bandwagon with traditional motifs