Dreamcatcher is a girl group that cares about more than No. 1s

Dreamcatcher is a girl group that cares about more than No. 1s 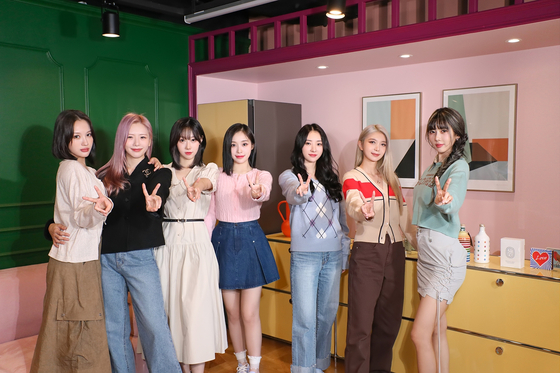 Girl group Dreamcatcher held a press interview for its new EP “Apocalypse: Follow us” on Oct. 5 in western Seoul’s Hapjeong prior to the release. [DREAMCATCHER COMPANY]


In April, Dreamcatcher left an impression on the K-pop scene and scored its first No. 1 on a music show with “Maison,” a rock metal number about a climate change apocalypse.

The girl group is now back to continue its unique concept surrounding environmental damage, but this time with a more peaceful approach.

“Maison” was a chilling warning to people who turn a blind eye to climate change that “If you pretend not to notice, you will disappear too.” This time with its new EP “Apocalypse : Follow us” and lead track “Vision,” the group’s members take on the persona of political leaders urging people to care about the environment. 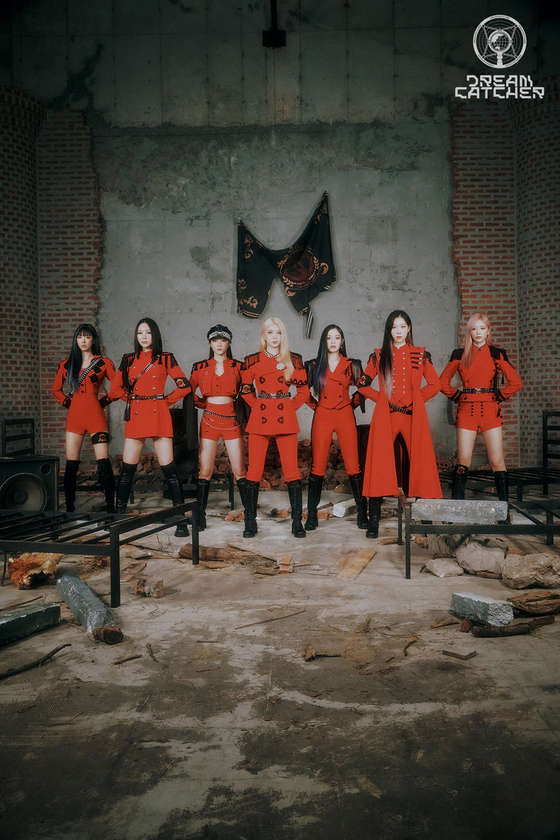 
Prior to the EP’s official release on Tuesday, the seven members of Dreamcatcher — JiU, SuA, Siyeon, Handong, Yoohyeon, Dami, and Gahyeon — sat down on Oct. 5 to discuss their new music at a press interview in Hapjeong, western Seoul.

“We had the demo version of ‘Vision’ in stock since long before ‘Maison,’” said Dami. “We actually didn’t think it would become a lead track one day. But it seemed it would be a great continuation of our story after ‘Maison.’”

“’Maison’ was about warning and fighting against environmental damage,” she continued. “This time, it’s the story after the fight; after the world has been destroyed into ruins. We want to resolve the problem in a peaceful way now. If you look at the album cover and music video, you can see us giving a speech dressed like politicians.” 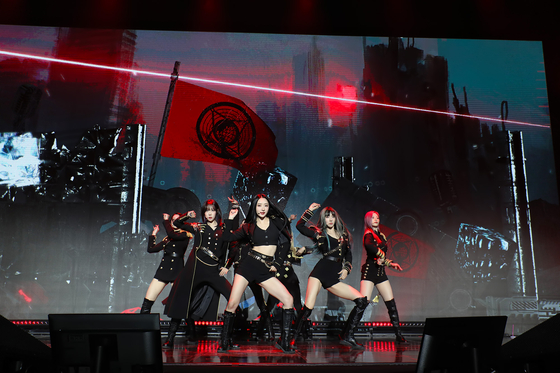 
The members explained that the “V” sign in the choreography stands for the key themes of the new release: peace, vision and victory.

Opening with a dreamy intro, “Vision” carries on with Dreamcatcher’s signature rock sound with galvanizing electronic guitar riffs and piercing vocals throughout the track.

“It combines techno and rock, creating a sound even more majestic than before,” said Yoohyeon.

“We feel a sense of pride that we’ve pioneered this rock sound and dark genre as a girl group,” said JiU. “Now that we’re seeing more rock elements in K-pop idol music again, we feel like we made the right decision to stick to our unique sound. If the music is good, the time for it to shine comes eventually.”

“We’ve survived in the world of girl groups for almost six years without disappearing,” said Gahyeon. “I think that fact alone is proof that we’re doing a good job.” 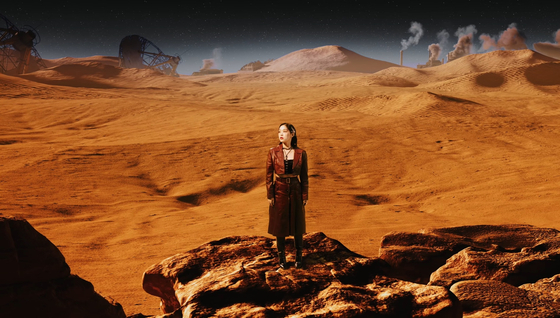 A scene from Dreamcatcher’s music video for “Maison” (2022), a song that warns about a climate change apocalypse [SCREEN CAPTURE]


Virtually the first K-pop girl group to focus on dark themes and metal sounds, Dreamcatcher debuted in 2017 and was considered somewhat of a niche artist. Its uniqueness was first recognized by listeners abroad, earning Dreamcatcher a reputation for frequently performing around the world. It continued to touch on serious social issues, such as hate comments and mental health which the girl group sang about in “Boca” (2020).

But members say it always had a thirst to also receive domestic recognition. More than five years after its debut, Dreamcatcher finally got its wish, winning its first No. 1 on a Korean television music show, MBC M’s “Show! Champion,” with “Maison” in April.

“To be honest, after a certain point, we had given up expecting to win No. 1,” said SuA. “We thought that day would never come to us. So that day, we were on our way backstage to film a behind-the-scenes video, with no idea that our name would be called as No. 1. Even when I saw our name on the big screen, my brain couldn’t process it for a while, but tears were rolling down my cheeks.”

“I wasn’t even crying,” said Gahyeon. “I was just hyperventilating. The moment I heard No. 1, I thought of my fellow members and how much we’ve been through together. After we got off stage, that’s when I started crying, after everything hit me.” 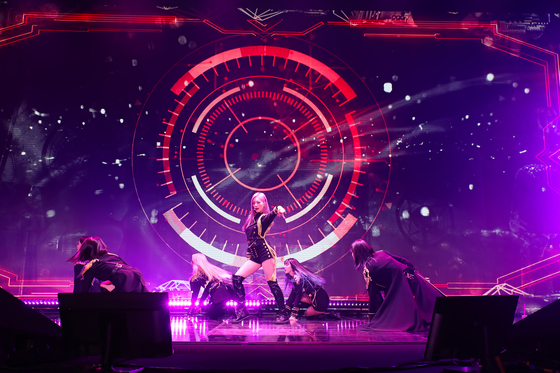 
“It felt like we finally reached this goalpost we had been dreaming of, and all of our burdens had been put down,” added Siyeon.

Members described the win in April as a new beginning for their career.

“It feels like a brand new chapter has started again,” said SuA. “We are ready to face whatever difficulty lies ahead of us from now, and to build a whole new story […] Of course we’d like to win No. 1 on another occasion, but the thing about breaking a record is that there’s no end to it. I’ve already found satisfaction in the fact that I’ve met so many good people along the way.”

Even after years of extremely conceptual releases, members say they have no plans of slowing down. They shared their ideas on what social issues they want to tackle next.

“In fact, singing about love has gotten a bit boring now,” laughed Yoohyeon. “We already released enough love songs for our B-side tracks, so we’d rather have our lead tracks convey really heavy messages. We don’t really want any softer lead tracks!” 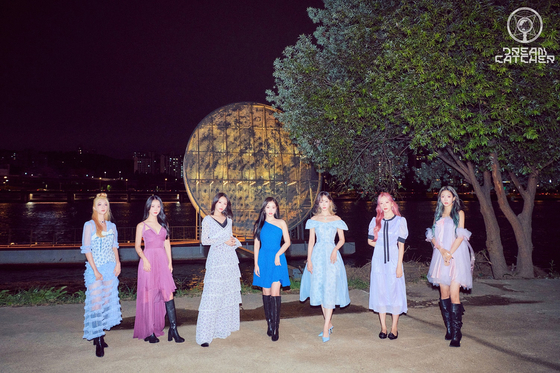 A concept image for Dreamcatcher’s “Apocalypse : Follow us” [DREAMCATCHER COMPANY]


“We’ve been thinking about dealing with the topic of violence, especially random acts of violence, in the future,” said JiU. “It sounds like it’s going to be a bit too deep, doesn’t it? But I feel like there’s so much anger and violence in society nowadays, and I want to tackle the topic in our own way.”

“The only trouble we still have is, how we’re supposed to embody those deep concepts on stage,” said Dami. “Like, what gesture do I make to express climate change? What facial expressions do I make when I sing about pollution? We have to think hard about those aspects to prepare for a comeback.”

The members added that another pressure that they feel after the success of “Maison” is that because they’ve become known for warrior-like anthems about protecting the environment, they’ve also become conscious in their everyday lives to embody the value themselves. For instance, Dreamcatcher is planning to replace all its concert tickets from paper to digital. Its new EP is also being released in a digital option, with photo card components available in the form of digital downloads. 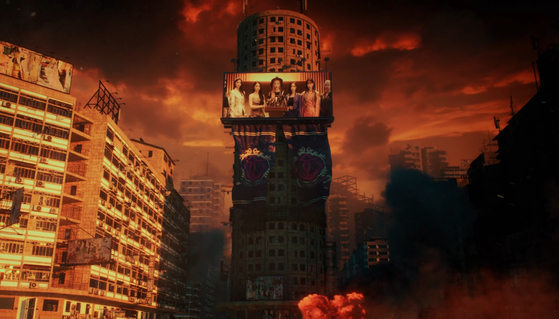 A scene from Dreamcatcher’s music video for “Vision” [SCREEN CAPTURE]


“On a personal level, from buying local produce to using public transport, we’re doing small things that can help the environment,” said JiU. “I feel like our efforts, as well as the message in our songs, can lead listeners to take more interest in the environment. At least we want them to stop and wonder what we’re singing about in our songs, hopefully ending up more interested in the topic.”

“There’s been a ‘Maison’ challenge among our fans back when we came out with the song,” added Dami. “Our fans in Korea and around the world refrained from using single-use plastic, recycled as much as possible, used refillable products and what not.”

Recently for SuA’s birthday, Dreamcatcher fans recycled the celebratory banner and made it into tote bags. Fans are also known to often make donations to environment-related causes in the fan club or members’ names for birthdays and anniversaries.

“I also became conscious of delivery food and how much trash I end up with afterward,” said Handong. “It made me cook my own meals at home. I’m proud that we’re living our message ourselves.”


The girl group is set to embark on a tour of Europe in November and scheduled to perform in Berlin, Tilburg, Warsaw and London.

“We toured the United States over the summer, and we worried that the seats might not be full since we hadn’t been to the U.S. for a while due to the Covid-19 pandemic,” said Dami.

“But when we got there, we saw bigger audiences than ever. Seeing fans rave at our shows gave us so much energy. Some of them had been waiting outside of the venue for 12 hours!”

“We’re also going to have a concert in Korea before our Europe tour,” said Dami. “I know we’re known to tour abroad a lot, but we also film a lot of content in Korea. I hope our domestic fans take note of that!” 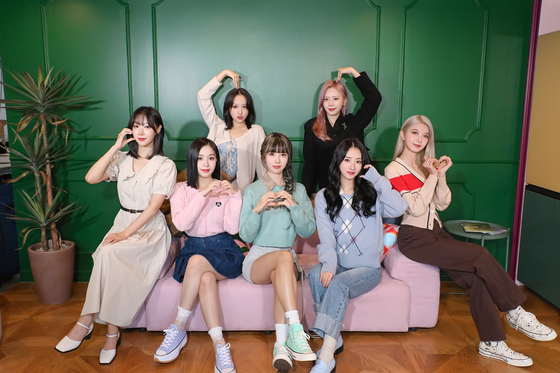 Dreamcatcher poses during a press interview on Oct. 5. [DREAMCATCHER COMPANY]