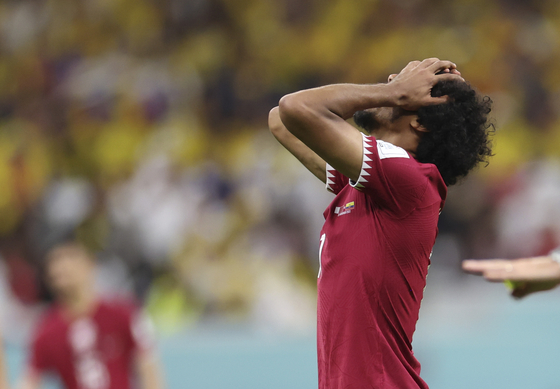 Akram Afif of Qatar reacts during a Group A match between Qatar and Ecuador at the 2022 World Cup at Al-Bayt Stadium in Qatar on Sunday. [XINHUA/YONHAP]


An Enner Valencia double led Ecuador to a 2-0 win over Qatar in the opening game of the 2022 World Cup on Sunday, blanking the hosts on what was supposed to be Qatar’s big night on the global stage.

Qatar’s coming out party came to an abrupt end just minutes after the opening whistle, with Valencia finding the back of the net. That goal was eventually disallowed after a VAR review, but the message was obvious: Despite years of throwing money at the problem, Félix Sánchez’s finely-tuned Qatar squad fell apart at the first sign of tough opposition. 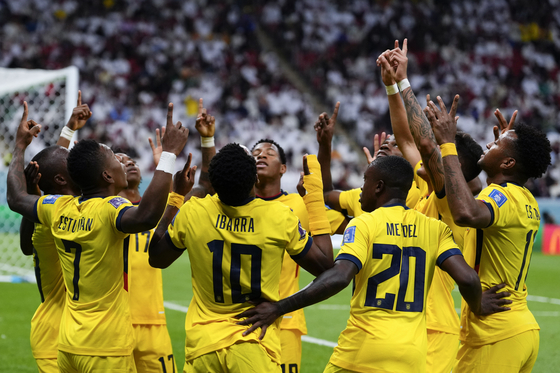 Ecuador players celebrate after Enner Valencia scores their side’s opening goal against Qatar during a match between Qatar and Ecuador at the 2022 World Cup at Al-Bayt Stadium in Qatar on Sunday. [AP/YONHAP]


It didn’t take Ecuador long to make the host side pay. Valencia got another chance in the 16th minute with a penalty following a foul from goalkeeper Saad al-Sheeb.

He returned 15 minutes after converting that penalty to score again with a header that put the South American side up 2-0 and saw whole sections of the Qatari crowd head for the door before the half-time whistle. 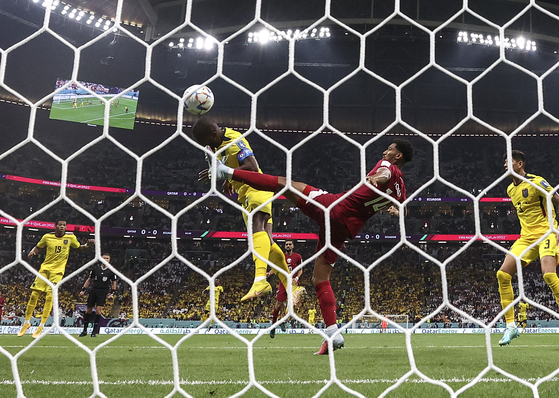 Enner Valencia of Ecuador heads the ball during a match between Qatar and Ecuador at the 2022 World Cup at Al-Bayt Stadium in Qatar on Sunday. [XINHUA/YONHAP]


Qatar settled down after the two early goals and were able to hold off the onslaught for the rest of the game, but by then the damage was well and truly done — Qatar are the first World Cup host country ever to lose the opening game. 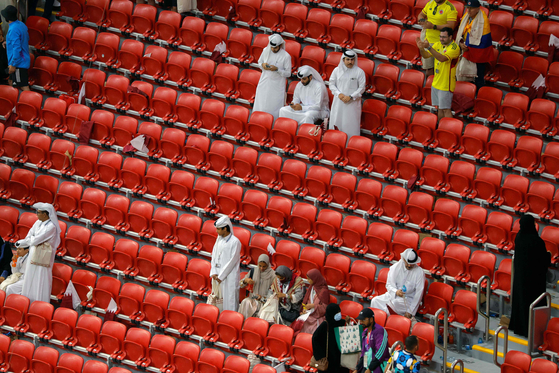 A view of the stands at the end of a match between Qatar and Ecuador at the 2022 World Cup at Al-Bayt Stadium in Qatar on Sunday. [AFP/YONHAP]


The opening game followed the glitz and the glamour of the opening ceremony, where Morgan Freeman and BTS member Jungkook both took to the stage to kick-off the tournament.

While opening ceremonies are not normally a big part of the World Cup, the Qatari organizers took the opportunity to put on a show in the stadium ahead of the Qatar vs. Ecuador match. The smoothly put-together production kicked off the tournament with a bang, although it was unable to avoid being overshadowed by the flood of controversies surrounding the event. 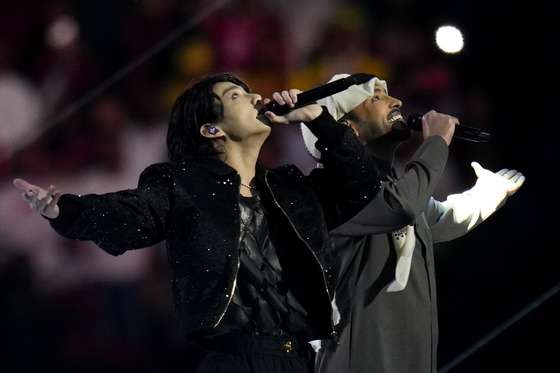 
Qatar spent 12 years preparing for both the spectacle of the World Cup and the football of it.

The issues off the pitch — the deaths of thousands of migrant workers, the host nation’s horrific human rights record, the banning of alcohol from stadiums at the eleventh hour, the farcically large sums of money thrown at celebrity backers — have dominated the media cycle for months and will continue to do so throughout the tournament, but Qatar — or perhaps just Qataris — had hoped that they could at least prove their credentials on the pitch. 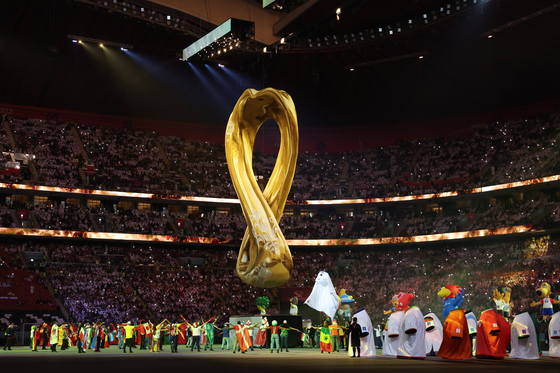 Dancers perform during the opening ceremony for the 2022 Qatar World Cup at Al Bayt Stadium on Sunday. [XINHUA/YONHAP]


The reality was far from that. It was a disappointingly one-sided affair, a non-contest and an exceptionally lackluster start to the biggest tournament for the most popular sport on the planet.

“Maybe the responsibility and nerves got the better of us,” Qatar manager Sánchez said after the game. “We had a terrible start and this determines the rest of the match. We’ll just have to forget about the pressure and be more competitive. We can do it.”

Perhaps the one good thing to come out of the game for Qatar was, bizarrely, the penalty given to Valencia that led to their first goal. Without that ruling, the VAR decision to disallow Ecuador’s first goal likely would have been met with far more of a furor and, inevitably, accusations of favoritism and cheating.

Clearly that wasn’t the case, and the decisions balanced out before anyone could cry foul too loudly.

Qatar have a lot of work left to do if they want to leave this World Cup with a shred of dignity left. Despite the collapse on Sunday, it shouldn’t be outside the realm of possibility for the Middle Eastern side to at least score a goal or two, they are, after all, the Asian champions and have played some good games in recent years.

The Netherlands and Senegal will face off later today, with England also taking on Iran and Wales playing the United States.