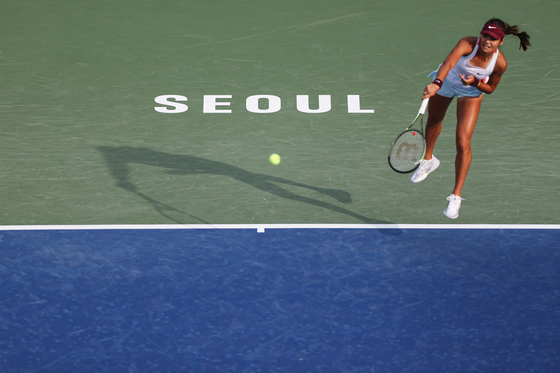 
2021 U.S. Open Champion Emma Raducanu is through to the semifinals of the Hana Bank Korea Open, beating third seed Magda Linette of Poland in two straight sets on Friday.

Raducanu dominated the match at the Olympic Park Tennis Center in southern Seoul, breezing through both sets 6-2, 6-2 without the late-game wobbles she struggled with in earlier rounds.

After winning the first game of the second set, Linette appeared to struggle with thigh discomfort, calling a medical timeout in the third game. She returned to the court, but was unable to match Raducanu’s pace after the break.

Raducanu became one of the biggest underdog stories in modern tennis last year when she became the first player to win a Grand Slam title after starting in the qualifiers.

Having only made her Grand Slam debut at Wimbledon last year, just two months before entering the U.S. Open, Raducanu smashed her way through the U.S. Open without dropping a set to reach the finals, which she also won in straight sets.

However, despite reaching world No. 10 in July this year, Raducanu started to struggle and slowly slid down the world rankings to enter Wednesday’s match at No. 77.

Linette, who debuted in 2009, climbed to a career-high No. 33 in 2020. The 30-year-old is also a strong doubles contender, and made it through to the semifinals of the doubles tournament at the French Open last year.

Raducanu, the sixth seed, will face either top seed and 2017 French Open winner Jelena Ostapenko of Latvia or world No. 186 Victoria Jimenez Kasintseva in the next round.