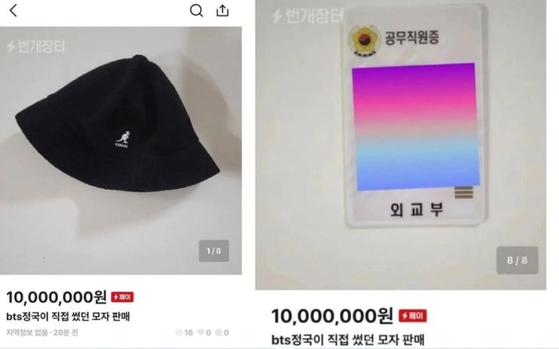 The bucket hat allegedly worn by BTS’s Jungkook with a price tag of 10 million won ($7,000) appeared on an online flea market platform on Monday. The seller used an employee’s ID card that belongs to the Ministry of Foreign Affairs to prove their identity. [SCREEN CAPTURE]

The price set by the netizen was 10 million won ($7,000). The seller deleted the item shortly after, but it has created a great stir online nonetheless, not just for the hefty price tag but also because the seller also uploaded a picture of an employee ID from the Ministry of Foreign Affairs to prove their identity and the item’s authenticity.

The seller claimed that they work as a full-time employee at the ministry. The mugshot on the ID was covered up in the picture.

“When BTS members visited the Passport Division to create diplomatic passports, Jungkook left this bucket hat in the waiting area,” the seller wrote. “After reporting the hat as a lost property, we waited for six months, but there was no phone call or visit to acquire the hat. Therefore, the person who found the hat now has ownership.”

The seller added that the hat looks “very used” but that it’s “priceless.”

“He’s a world-famous singer, so the value of this hat is expected to rise further,” the seller added. “I have no intention to adjust the price.” I think it will be worth more than the current price in the future.”

The post infuriated BTS’s fans, condemning the seller and claiming that it’s not even correct to say that the seller has ownership. Under the Korean law, taking ownership of a lost property without notifying the police is a crime that can be sentenced by up to one year in prison or a fine of up to 3 million won.

An official from the Ministry of Foreign Affairs said it is true that the BTS members visited the ministry’s building last year for diplomatic passports, but there was no record of any lost property.