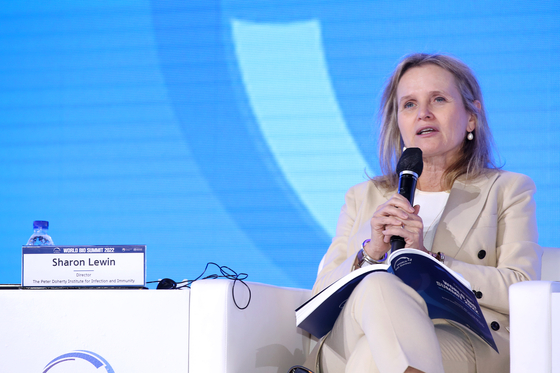 Sharon Lewin, director of the Peter Doherty Institute for Infection and Immunity, speaks at the World Bio Summit 2022 on Wednesday. [WORLD BIO SUMMIT]


With the prospects of Covid-19 becoming endemic, the development of Covid-19 antiviral drugs is at a crossroads.

U.S. President Joe Biden has already declared the pandemic over. World Health Organization (WHO) Director-General Tedros Adhanom Ghebreyesus did not go that far, telling a press briefing in September that “we are not there yet, but the end is in sight.”

In a plenary session of the 2022 World Bio Summit in Seoul on Wednesday, Professor Sharon Lewin, director of the Peter Doherty Institute for Infection and Immunity and Australia’s leading infectious-disease expert, emphasized the importance of antiviral drugs in a pandemic.

Lewin highlighted that antivirals, including oral antiviral treatments, can protect against infection and hospitalizations.

Yet it took much longer to develop an antiviral compared to a vaccine. For instance, Pfizer’s oral antiviral drug Paxlovid took a year longer to be developed than its mRNA vaccine. If an antiviral was developed within six months of the outbreak instead of within two years, about 4 million lives would have been saved, according to Lewin.


The Korea JoongAng Daily sat down for an interview with Lewin on Wednesday at the Grand Walkerhill Seoul in eastern Seoul to discuss her views on antiviral treatments and on Korea and Australia’s Covid-19 strategies.

Below are edited excerpts of the interview.


A. We still need antivirals now, even in the latter phases of the pandemic and even with widespread vaccination because people still get infected, still go to hospital and still die. So we need treatments for those people, and they can actually make a very big difference. Early in the pandemic, you definitely need a vaccine, because vaccines can be given to lots of people much quicker, and much cheaper.

Antivirals act as an extra layer of security on top of the other things that we can do to minimize the impact of a new pandemic. Antivirals are harder to implement, but they’re an additional layer of protection and can contain a pandemic early.


You mentioned in your presentation that 4 million deaths could have been prevented if antivirals were made available earlier. How did you come up with such a figure?

Remember when we were in 2020, we had no vaccine until the end of the year. And we know that Paxlovid reduces the chance of hospitalization by 80 percent. The estimates were made on the numbers of infections at that time, going out to October 2021, and if we could have reduced hospitalizations by 80 percent. The argument I was putting forward was that developing antivirals as quickly as vaccines can be very beneficial in the early days of a pandemic.


Why did it take so long for antivirals to be developed?

The first reason is that Covid is a very complex infection. You have a lot of virus replications early in the first few days of infection. And if your immune system doesn’t do a good job, you get sick in the second week. And then you deteriorate usually in the third week. So it’s already too late for antivirals. It took a while for the scientific community to work out that you have to use an antiviral drug early to get benefits.

Second, we use old-fashioned ways to find new antivirals. We screened old drugs and we screened libraries of new drugs to see if they have potential, and that takes time. And the screening was initially done in non-human cells, which gave us a few wrong leads.

Third, there aren’t great antiviral drugs for any respiratory infections, even for influenza. They reduce the duration of symptoms by about 24 hours. That’s all they do.


Korea and Australia have opposite seasons. Domestic experts are warning of another wave in our winter, and coming from a country that already experienced the winter season, what advice can you give?

We still have to stay vigilant for Covid-19, we still need to make sure we’ve got widespread testing, widespread surveillance for new variants. Every country needs to report their new variants so we know what’s happening around the world. Emphasize the importance of booster doses, two doses are not enough. And create programs that ensure people know about antivirals.


The Australian government lifted self-quarantine requirements for Covid-19 patients as of Oct. 14. How was that taken by the public, and did it have an impact on new infections?

The public’s reception was mixed but I think the majority of the public want life to be normalized providing it is safe to do so. Overall, it positively responded. And there was no change [in Covid-19 cases.]


The indoor mask mandate, along with the quarantine rule, is one of the last remaining Covid restrictions in Korea. Do you think it is time for Korea to drop the mandate?

It’s very hard for me to comment on Korea’s policies. You can’t compare infections across countries, because although you’ve still got large numbers of infections, your testing rates and your reporting may be different from ours.

It’s really fascinating to me how Koreans wear masks outdoors, consistently. Australians were very keen to get rid of masks, so mask outdoors were dropped a long time ago. Mask indoors were no longer mandated [in September] except for areas where lots of vulnerable people are — in hospitals and aged care facilities. Masks are recommended to be worn in indoor places where you can’t physically isolate or on public transport.

In a highly vaccinated population, which Korea is, you need to consider what the overall strategy is — to reduce infections, to reduce hospitalizations, to reduce deaths, or all three? I think with Omicron and high levels of vaccinations, many governments are moving away from trying to reduce infections, because the bang for your buck is less, and rather focus on reducing hospitalizations and deaths, which means making sure people are vaccinated and they’re boosted.

So I think if the overall strategy is to reduce hospitalizations and deaths, then the big efforts to reduce infections like mask wearing may not be giving you the biggest benefit.

I think vaccination has definitely broken the link between infection and disease. So even when we see infections, we see less disease. But there’s always a chance we’re going to get another variant that can give lots of infections and lead to a big burden for our hospitals. We also don’t know how long the protection against disease lasts from our existing vaccines.

But if I had to predict, the waves will be less severe over time with less impact on our health systems, but still will affect vulnerable people in our communities, immunosuppressed people, the elderly, and people who haven’t been vaccinated.