Jo Yuri shifts focus from breakups to herself

Jo Yuri shifts focus from breakups to herself 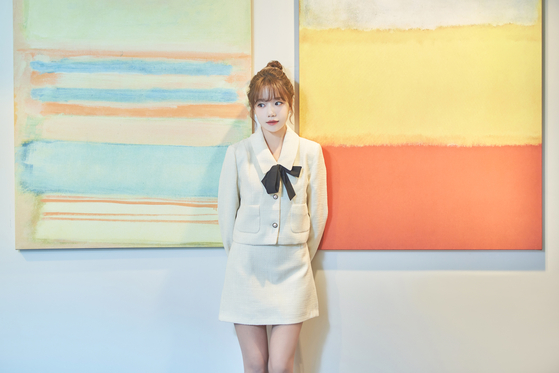 Prior to the release of her new EP “Op.22 Y-Waltz : in Minor” on Monday, singer Jo Yuri sat down for a press interview on Oct. 21 in Sangsu, western Seoul.

“It’s been quite hectic, but I was fortunate to find a great song and concept really quick,” 21-year-old Jo said Friday.

“Love Shhh!,” her previous lead track, was a confident breakup anthem. This time, she turns the focus to herself in lead track “Loveable.”

“Loveable” is a soothing number with a tender melody and warm ambience, and reminds the listener “You’re so loveable.” Jo sings about how everything starts from loving oneself, and that we are all loveable beings whose flaws are also what makes us valuable. 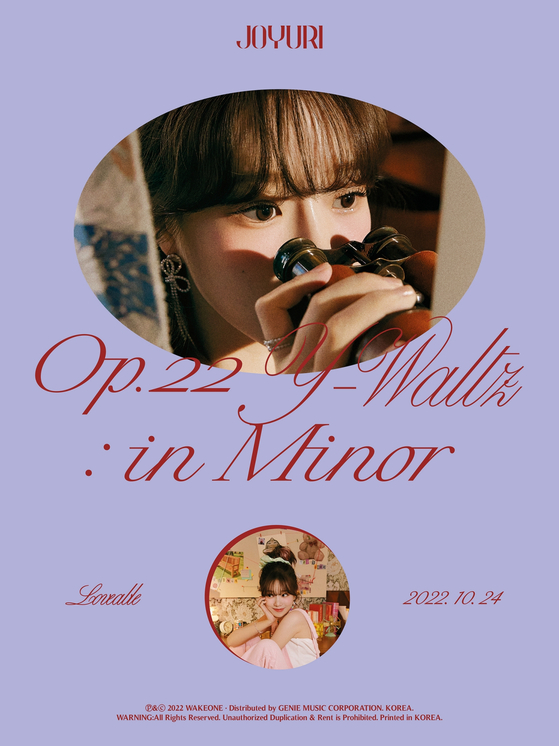 
“I thought this would be a song that everyone can enjoy and relate to, regardless of age or gender,” she said. “I fell in love with it the moment I listened to it. It has a melody that’s perfect to sing along to, especially the last part. I could picture fans singing along in unison at a concert or meet-and-greet.”

In an age of powerful, ear-piercing beats with a focus on performance, Jo’s melodic track comes as a fresh breeze in K-pop.

“Considering the subject matter, I wanted the comforting message to reach a wide audience,” she said. “So I wanted the music style to be something that can appeal to generally everyone. It’s a song you can enjoy on its own, even without watching the performance.”

Jo noted that the song was upgraded dramatically.

“When I first heard this song, it wasn’t meant to be the lead track,” she said. “It almost never made it on the album at all. But I said the song is so good, and luckily my agency reconsidered it. They always prioritize what I want to do and what message I want to convey.”

“The lyrics that spoke to me the most were, ‘it’s okay even if it’s difficult’ and ‘so what if you’re clumsy,’” she continued. “It’s what this song is all about. I’m really a perfectionist toward myself and have been trying to live up to that so strictly. I realized I needed to tell myself those comforting words too.” 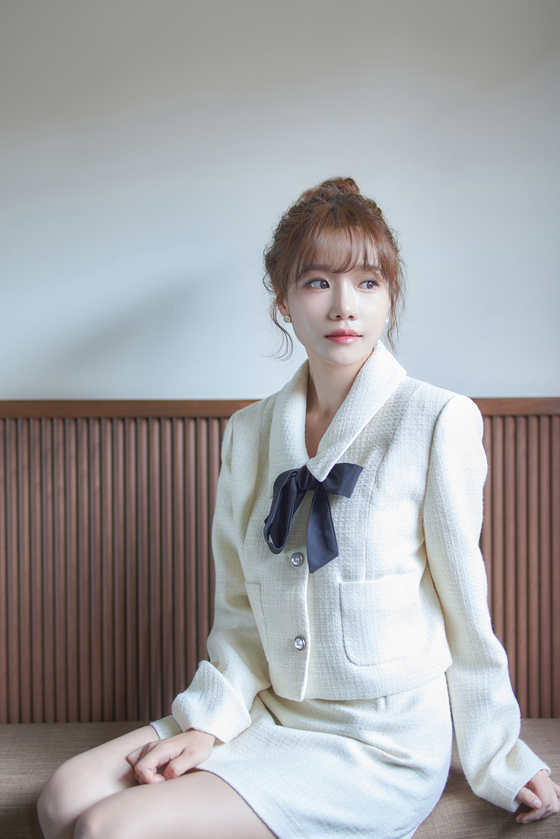 
A noticeable change in songs released by female K-pop acts is that they are singing less about boys and more about themselves – be it self-love, inner strength or other internal emotions.

“I really feel things have changed,” she said. “My previous song was about a breakup, you know, what happens after loving someone else. But at the end of the day, loving myself is the most important thing. I remembered how I get so much comfort whenever my fans and friends told me that even my flaws are cute. So I wanted to create something that comforts others the same way.”

“I chose ‘Blank’ because it’s a vocal style and ambience I’ve never shown before,” she said. “I thought it was a great opportunity to show off my vocals. I want people to listen to this and think, ‘Oh, this girl really is a good singer.’ My favorite phrase is ‘vocal fingerprint,’ as in people can tell right away whose singing voice it is because it’s unique. I think my husky yet clear voice is my unique vocal fingerprint.” 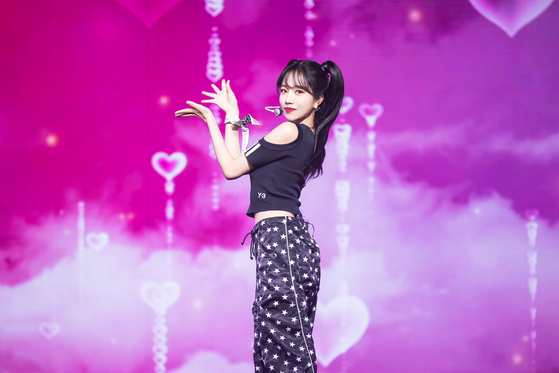 
Jo recently made her acting debut in “Mimicus,” a Playlist teen web drama series that was uploaded from July to September. While many K-pop idols have started acting on the side, Jo’s performance has received especially positive reviews.

“I used to get my hands on television series scripts and reenact those scenes since I was in the sixth grade,” said Jo. “I’m so happy to have gotten an opportunity. The acting experience came in very handy when I was filming the music video for ‘Loveable.’ I’ve also been told that I became so much better at pouring all my emotions into a song.”

“I’m currently in talks for more acting roles in the future,” she added. “I really want to try the mystery, horror or zombie genres someday, because I’ve been a fan of them for so long.” 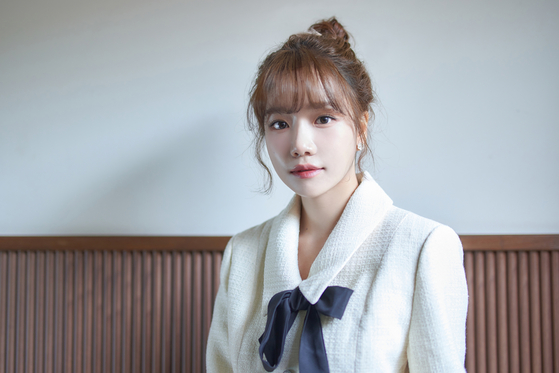 
“It’s the first session just for me and Glassy,” she said, referring to the name of her fandom. “There’s going to be a lot of performances in the style they’ve never seen me in before.”

Ever since she competed on “Idol School” in 2017, Jo has never stopped challenging herself to new fields. She has been a member of an idol group, started a solo music career last October and has tried her hand at acting. The singer also gave her first performance at a live music festival earlier this month.

“I’m naturally not afraid of challenges,” she said. “I think it’s because not getting what I want never fazes me. I simply tell myself I’ll get it done someday. Maybe it’s because my goals are usually quite humble, so I feel a sense of achievement pretty easily. The key is to set a goal that doesn’t concern others. I don’t think about doing better than someone else; it’s about what I can do. During ‘Produce 48,’ my goal wasn’t necessarily to make it on the final lineup. It was to hit that high note in a certain song, and other small personal goals like that. 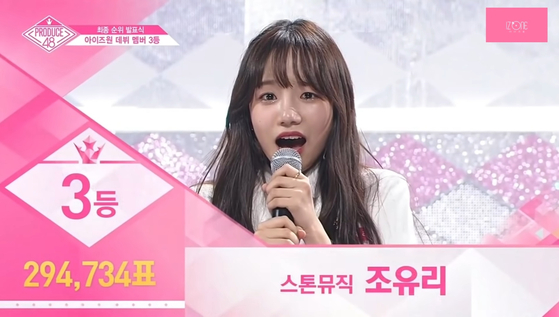 Jo on the final episode of Mnet’s idol audition show “Produce 48” (2018), on which she was announced as one of the 12 finalists. [SCREEN CAPTURE]


“Recently, I set two goals for myself while filming ‘Mimicus.’ First was to not use my native Busan dialect while acting. Second was to do my absolute best to the point that when I look back, I think I won’t be able to work that hard ever again. I had made the same promise to myself when I was on ‘Produce 48.’ I think I achieved both of them. Because I absolutely hate feeling regret, I just never make any situation that I’d regret.

“I really want to grow into an idol-turned-actor like Jeong Eun-ji.”

The singer says a big source of energy throughout her solo journey has been encouragement from former IZ*ONE groupmates. 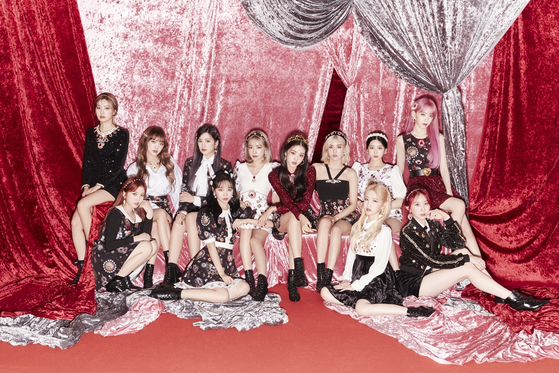 
“I ran into Eun-bi at the hair and make-up salon just today,” she said, referring to ex-IZ*ONE member Kwon Eun-bi.

“I ran into her arms like a child. Whenever we meet we talk about the old days as IZ*ONE, although it wasn’t that long ago,” she laughed. “We are always ready to hype each other up for our new releases. Members were also avid viewers of ‘Mimicus’ and gave me feedback!”

She said Minju of IZ*ONE complimented her acting, and that at KCON in Japan, former groupmates Hitomi and Nako gave her a bottle of honey as a gift. 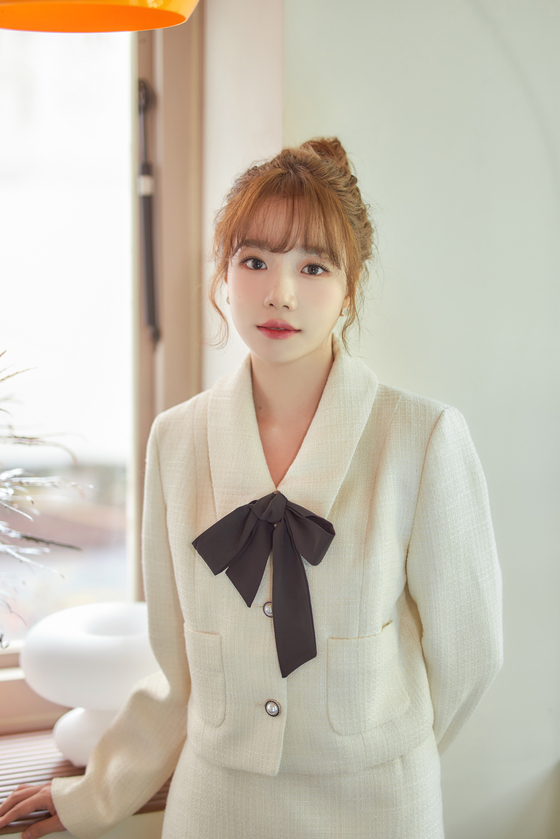 
Wrapping up the interview, Jo said her ultimate goal was to become an entertainer that people can ‘count on.’

“I want them to call me ‘Jo Yuri who never lets you down,’” she said. “Whether it’s music or another drama series by me, I hope they say, ‘I just know it’s going to be great.’ And I’ll do my best for that.”