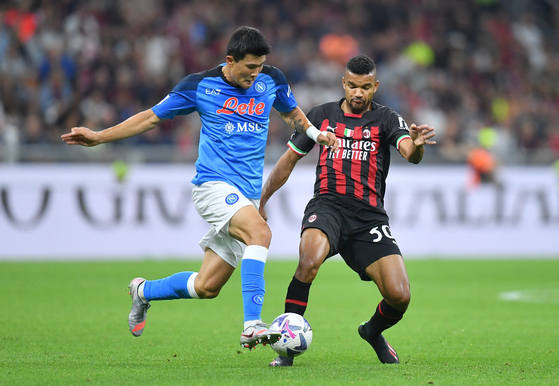 Napoli’s Kim Min-Jae, left, in action with AC Milan’s Junior Messias during a game at San Siro Stadium in Milan on Sunday. [REUTERS/YONHAP]


With a 2-1 win against reigning Serie A champions AC Milan on Sunday, Napoli enter the international break without a single loss in nine games across all competitions so far this season.

Sunday’s win topped off a fantastic run for the Italian club, which has also seen them topple Lazio 2-1 and treat Liverpool to a 4-1 thumping in a Champions League group stage match.

For Korean center-back Kim Min-jae, it’s difficult to imagine a better start to his fledgling Serie A career.

Since arriving in Naples, Kim has played the full 90 minutes in eight of Napoli’s nine games so far this season, resting for a Serie A game against Spezia Calcio last week. 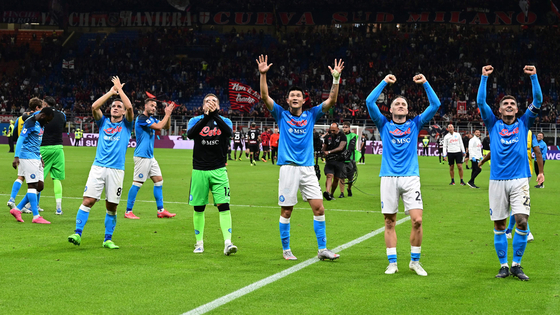 
Across all those games, Kim and the Napoli defensive line have only conceded six goals, five in league games and one against Liverpool. Not only has Kim pulled his weight in defense, he has also scored two Serie A goals so far this season, against Monza on Aug. 21 and Lazio on Sept. 3.

Kim is only the third Korean ever to play in the Italian league, but his career is already off to a stronger start than either of his predecessors — Ahn Jung-hwan and Lee Seung-woo.

Ahn played 30 games for Perugia in the early 2000s, but his career there was sabotaged when he scored the goal that knocked Italy out of the 2002 World Cup, while Lee made 14 appearances for Verona in the 2017-18 season, before the club was relegated out of Serie A and he was eventually relegated out of European football, returning to Korea last year without a contract.

Lee’s Serie A career ended with just one goal, a record that Kim has already beaten. Ahn managed five goals across two seasons, with Kim already hot on his heels. Both Lee and Ahn play in offensive positions.

Kim is now headed back to Korea where he will join the Korean national team for two friendlies — against Costa Rica at Goyang Stadium in Goyang, Gyeonggi on Sept. 23 and Cameroon at Seoul World Cup Stadium in Mapo District, western Seoul on Sept. 27.

Kim rejoins the national team after he was forced to sit out the Taeguk Warrior’s summer friendlies while he recovered from ankle surgery. As one of the most experienced national team players and the de facto leader of Korea’s defense, Kim’s return comes at a crucial time ahead of the 2022 Qatar World Cup in November.

Where does Hwang Ui-jo go from here?