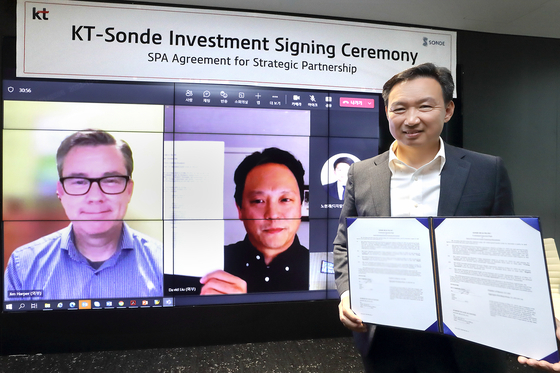 Executives from KT and Sonde Health pose for photos after signing a $2 million investment deal. [KT]

Vocal biomarkers are signs of changes in the voice — the volume, pitch or difference in the movement of vocal cords — that can be used to determine illnesses or abnormalities in a person.

It is similar to, but more advanced than how people can tell if another person has a cold by their voice.

Massachusetts-based Sonde Health has the largest database of health conditions that can be distinguished by changes in the voice, according to KT. The company analyzes a patient’s voice using its technology to give a diagnosis.

KT will use the U.S. company’s technology to analyze users’ health through its smart speakers or its call centers. It will also be used in a telemedicine service KT is preparing to launch in Vietnam.

“We hope to see great synergy through the deal as KT is carrying out diverse businesses using voice,” said the company in a press release.

This is KT’s second investment in a digital healthcare company following a $5 million investment in Los Angeles-based NeuroSigma last December.

NeuroSigma’s digital treatment for attention deficit hyperactivity disorder (ADHD) has been approved by the U.S. Food and Drug Administration (FDA). The percentage purchased was not disclosed by KT.

Bespin Global to list next year despite big, growing losses