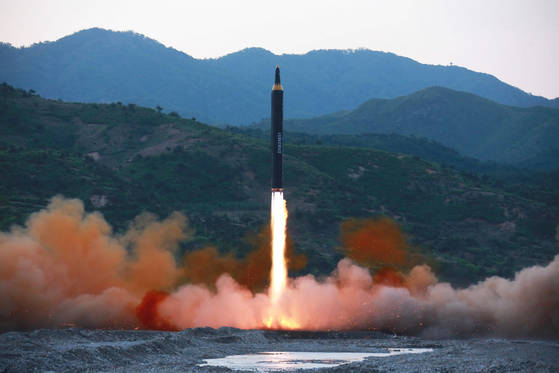 A photo of the Hwasong-12 intermediate-range ballistic missile (IRBM) released by Pyongyang’s Korean Central News Agency (KCNA) following a test in May 2017. The IRBM fired on Tuesday morning was likely the same type, according to experts. [YONHAP]


North Korea fired a missile that flew farther than any before — 4,600 kilometers (2,850 miles) — and South Korean President Yoon Suk-yeol warned of a “resolute” response.

The intermediate-range ballistic missile (IRBM) travelled over Japan before landing in the Pacific Ocean, reaching an apex of 1,000 kilometers and a terminal speed of Mach 17 in its final re-entry phase, according to South Korean military authorities.

The test triggered a nationwide emergency alert in Japan — known as a J-Alert — for the first time in five years.

Seoul’s Joint Chiefs of Staff (JCS) said that the South Korean military detected the launch of a single IRBM from Mupyong-ri in Chagang Province at 7:23 a.m. Tuesday morning.

Experts believe the IRBM launched Tuesday to be the same Hwasong-12-type missile last fired in January. The missile in that test flew some 800 kilometers and reached an apex of 2,000 kilometers.

In response to the test, a South Korean F-15K fighter fired two Joint Direct Attack Munition (Jadam) guided bombs at a firing range on the unhabited island of Jikdo in the Yellow Sea on Tuesday, the South Korean military said.

In comments to reporters, South Korean President Yoon said, “Such reckless nuclear provocations will be met with a resolute response from our military and our allies, as well as the international community.”

The president attended a National Security Council (NSC) meeting that later issued a statement “strongly condemning” the launch, calling it a clear violation of United Nations Security Council resolutions and a serious threat to peace on the Korean Peninsula, in Northeast Asia and beyond, the presidential office said.

“South Korea clearly states that North Korea’s continued provocations cannot be overlooked and will come at a cost, while we will seek various measures against North Korea, including strengthened sanctions within the international community, based on close cooperation with the United States,” according to a statement from the NSC.

The NSC meeting was presided over by National Security Adviser Kim Sung-han and attended by presidential chief of staff Kim Dae-ki, Foreign Minister Park Jin and Defense Minister Lee Jong-sup, among others.

Kim Sung-han held separate telephone discussions with his U.S. counterpart, Jake Sullivan, and Japanese counterpart, Takeo Akiba, about the launch, according to the presidential office.

Washington also condemned North Korea’s missile launch over Japan as “dangerous and reckless” and pledged to defend its allies South Korea and Japan, but said it remained open to talks with Pyongyang.

Tuesday’s test was the North’s fifth test in 10 days.

The North launched one short-range ballistic missile (SRBM) on Sept. 25, then two last Wednesday, another two the following day and two on Saturday.

The last time a J-Alert was triggered in Japan was in August 2017, when Pyongyang launched a Hwasong-12 IRBM that flew through Japanese airspace.

Special alerts were issued to residents of Aomori Prefecture and the island of Hokkaido telling them to take cover in buildings or underground shelters as the missile flew overhead.

Loudspeakers in Tokyo blared warnings to people to look out for falling debris, but commuters in Tokyo appeared calm in one video posted to Twitter from a user in Ichigaya Station in the morning.

The Tohoku-Hokkaido bullet train route was suspended between Shin-Aomori station and Morioka station as a precaution, but later resumed operations.

Japanese Prime Minister Fumio Kishida described the launch as a “violent act,” while Defense Minister Yasukazu Hamada said Japan would not rule out any option to strengthen its defenses including “counterattack capabilities.”

The ongoing spate of missile tests by Pyongyang came after Seoul and Washington wrapped up a joint naval exercise involving the aircraft carrier USS Ronald Reagan, as well as a trilateral anti-submarine exercise with Tokyo last week.