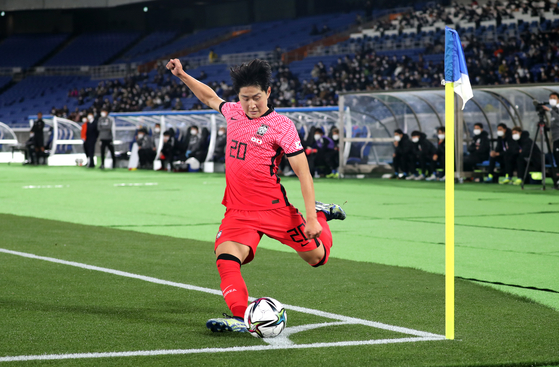 Lee Kang-in shoots during a friendly against Japan in March 25, 2021 at Nissan Stadium in Yokahama, Japan. [YONHAP]

Korea will first face Costa Rica at Goyang Stadium in Goyang, Gyeonggi on Sept. 23, before taking on Cameroon at Seoul World Cup Stadium in Mapo District, western Seoul on Sept. 27. 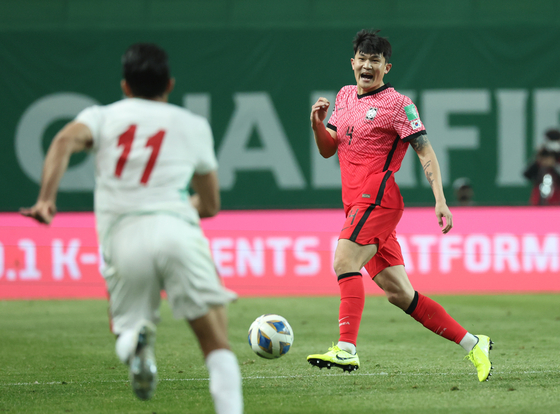 
Kim Min-jae has had an explosive start to his first Serie A season, scoring two goals in five matches with Napoli. Kim joined the Serie A club in July from Turkish club Fenerbahce after one year of playing in the Super Lig.

“I’ve already talked many times about him, he is a fantastic player with very good skills in both faces of the game,” Bento said. “He is playing in a good context in a very good league, he is playing the Champions League as well and having a good performance.

“What we expect and wish is everything goes well in the next games with him and with all the players in the list, because we know that there will be games in the middle of the week and on the weekend as well not just in Europe, but also in the local league. What’s important is that they keep playing and arrive healthy on Monday and start preparations for the next two games.”

Kim is only the third Korean ever to play in the Italian league, but his career is already off to a stronger start than either of his predecessors — Ahn Jung-hwan and Lee Seung-woo. Lee Seung-woo’s Serie A career ended with just one goal, a record that Kim has already beaten. Ahn managed five goals across two seasons, with Kim already hot on his heels. Both Lee Seung-woo and Ahn play in offensive positions.

“I’m not going to talk about all the players that are not selected,” said Bento when asked about Lee Seung-woo’s exclusion from the squad. “In this moment, he is not part of our options, it’s our technical and tactical decision. That’s all.” 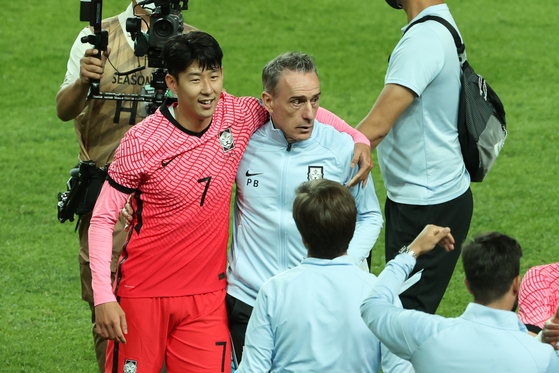 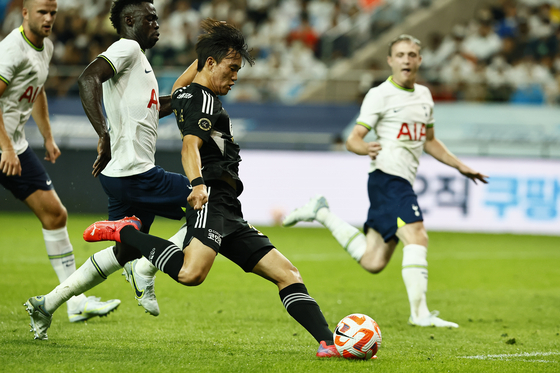 
In midfield, international stars Son Heung-min of Tottenham Hotspur, Hwang Hee-chan of Wolverhampton Wanderers, Lee Kang-in of Mallorca, Hwang In-beom of Olympiacos, Lee Jae-sung of FSV Mainz, Son Jun-ho of Shandong Taishan, Jung Woo-young of Al-Sadd and Jeong Woo-yeong of SC Freiburg are joined by Paik Seung-ho of Jeonbuk, Na Sang-ho of FC Seoul, Kwon Chang-hoon of Sangmu and Yang Hyun-joon of Gangwon FC. This is the first time that Yang has made the Taeguk Warriors roster in his career.

“The reason to select [Yang] is clear for us,” Bento said. “In this case, he is a player that will come on for the first time with us, he’s a player that is playing a lot. He plays [regularly] even if he is young and that is not so normal sometimes.

“He is a player with very good technical skills, a fast player that manages well the interior space in the offensive process. He’s played as a winger and scored some goals and we think he is a player that can help in this moment, it is important to see him in our context.” 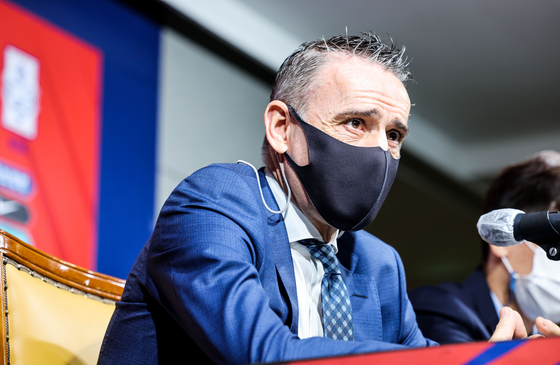 
For Mallorca star Lee Kang-in, the call up marks his return to the roster after an 18-month absence. The last time he played for the national team was in March 2021, when Korea lost a friendly against Japan.

“The reason to choose Lee Kang-in is the [same] reason as any other player,” said Bento. “Their performance, their moment and our needs for this training camp, are the reason we chose Lee Kang-in and all the other players that are included in the list.”

Lee Kang-in’s return to the national team comes after an explosive start to the 2022-23 La Liga season that has seen him beat his offensive record for the entirety of the 2021-22 season in just five matches. The young Korean midfielder picked up his third assist of the season on Sunday, setting up Mallorca’s sole goal during a 4-1 loss against Real Madrid.

Lee Kang-in has directly influenced the score in four straight games this season, scoring against Raya Vallecano on Aug. 27, picking up his first assist of the season on Aug. 20, then picking up his second assist on Sep. 3 against Girona.

Last season, he scored just one goal and picked up two assists across 30 games, although he played predominantly from the bench.

“Of course he is a player that should keep developing, his defensive tasks should improve a little bit, [as well as] his characteristic in the defensive process,” said Bento. “But as I said in the beginning, it’s not the most important thing for us. I don’t put too much focus on the individual player but what we can do in the team and thinking what each player can each do for the team.”

Unlike Lee Kang-in, Korean captain Son Heung-min looks set to enter the friendlies after a rough start to the season, with no goal in seven games as of press time Tuesday.

“I feel the same way [about Son], think the same way as when he scored a lot, really,” said Bento. “No concern, I will not talk with him about this. He will come next Monday in a good way, I will not spend any time on this kind of thing with him, but will focus on what we must do in these two games. All the confidence on him is as usual and for me, it’s not a problem. It’s not a concern.”

The two forward spots went to Hwang Ui-jo of Olympiacos and Cho Gue-sung of Jeonbuk Hyundai to round off the 26-men roster.

“Of course I can’t hide this, many players from this list will be in the World Cup and we will see who they are,” said Bento.