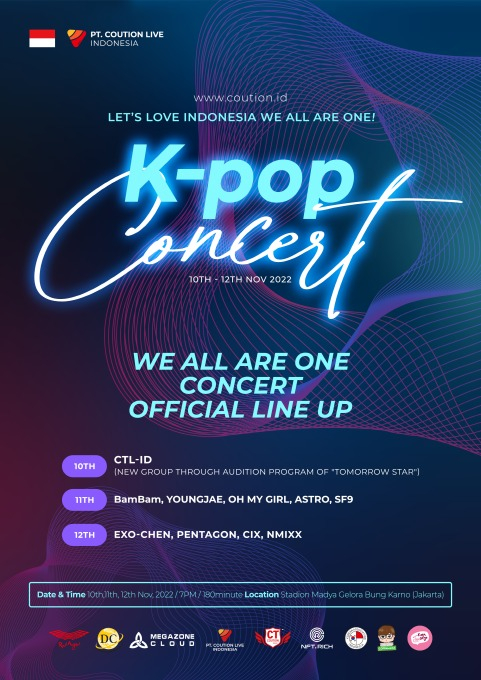 
The final lineup for “Let’s love Indonesia We all are one K-pop concert,” which will be held in Indonesia from Nov. 10 to 12, was confirmed Tuesday.

The concert, which will be held on a special stage at the Gelora Bung Karno Stadium in Jakarta, will feature Bambam and Youngjae of boy band GOT7, girl group Oh My Girl, boy band Astro and SF9 on Nov. 11, and Chen of Exo, girl group Nmixx and boy band Pentagon and CIX on Nov. 12.

Indonesian idol team CTL-ID, who was recently selected though a local K-pop audition, will hold a special concert at the basketball arena next to the main stadium on Nov. 10 and appear as opening guests of the main performance on Nov. 12.

“We were very proud that 40,000 tickets were sold out in a minute,” said a spokesperson from Coution Live, the host of the event. “We hope that this performance will serve as a catalyst for revitalizing cultural and economic exchanges with Indonesia.”

The concert can also be viewed online. Proceeds from online streaming will be donated to medical treatment and education projects in Indonesia.