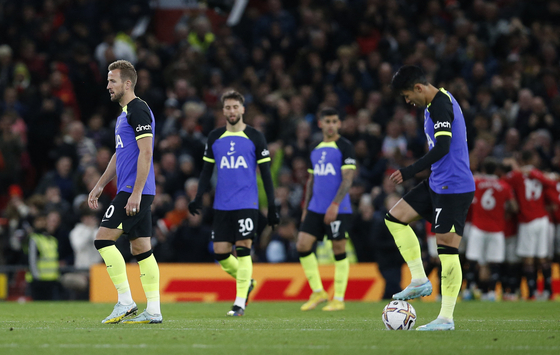 
Tottenham Hotspur were outmatched and outclassed by Manchester United on Wednesday, struggling to string together anything cohesive in the face of a dynamic opposing side that seemed far hungrier for the win.

It was a dull and insipid display from Spurs at Old Trafford in Manchester, England, losing 2-0 in a one-sided display that could well have been much worse. Tottenham fired off a grand total of nine shots to United’s 28, with the home side’s aggressive onslaught clearly paying off from the moment the whistle blew.

Both goals came in the second half, with Fred scoring in the 47th minute and Bruno Fernandes adding one more in the 69th.

Spurs manager Antonio Conte opted to fall back on the old Son Heung-min and Harry Kane up front method, relying on speedy quick breakaways to create goal-scoring opportunities. The pair played the full 90 minutes, with Richarlison and Dejan Kulusevski both out with injuries.

It’s an approach that has worked time and time again for the London club, but United manager Erik Ten Hag played a deep midfield to snuff out the speedy attacks.

Conspicuously, Ten Hag didn’t play his own breakaway man, leaving Cristiano Ronaldo on the bench for most of the game, until the final few minutes when he stomped off down the tunnel in a strop after not being utilized. Ronaldo was replaced by Marcus Rashford, a decision that the score suggests clearly worked.

The win is a very positive sign for Ten Hag, who joined United this year. While the club currently sits in fifth place in the Premier League, they are proving particularly potent giant killers, so far beating Tottenham, Arsenal and Liverpool.

For Conte and Spurs, the results are more concerning. United’s win came off the back of a very solid performance from the home side, but also a plethora of mistakes from the visitors.

“We have to be honest: United deserved to win and deserved to get three points,” Conte said after the game. “They started the game very well and created chances to score. In our side, we didn’t start the game, and it was really difficult also because we made a lot of mistakes, simple.

“For sure not a good game for us, but I have to be honest, and first of all, especially with my players, this was not the first time for us. Despite the table being good but every time we played a high-level game, we struggled.”

Conte also addressed concerns that Spurs tend to bottle it when faced with big name opponents like Manchester United.

“You need to arrive in this way with the war inside of you, ready to fight a war, and you have to know that at the end of the game, you die or your opponent dies.”