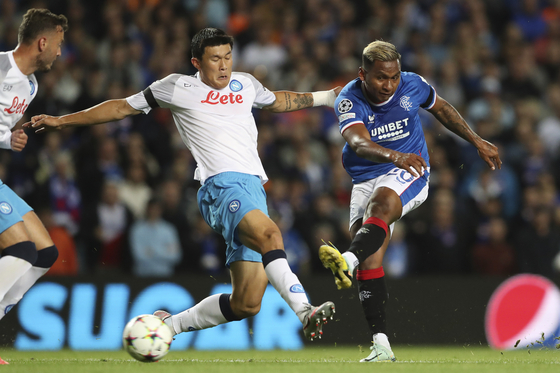 Rangers’ Alfredo Morelos, right, is challenged by Napoli’s Kim Min-jae during a Champions League Group A match at the Ibrox stadium in Glasgow, Scotland on Wednesday. [AP/YONHAP]


Napoli beat Rangers 3-0 at Ibrox Stadium in Glasgow, Scotland on Wednesday, rising to the top of Champions League Group A with six points and a huge plus-six goal difference.

All three Napoli goals came in the second half, with Matteo Politano opening the scoring by converting a 68th-minute penalty. The remaining two goals came from substitutes in the final minutes of the game, with Giacomo Raspadori firing the first past Rangers goalkeeper Allan McGregor in the 85th minute and former Tottenham Hotspur midfielder Tanguy Ndombele drilling a third down the middle in injury time.

Korean center back Kim Min-jae played the full 90 minutes for Napoli as he continued a dominant first season with the Serie A club, playing full time in seven of eight games across all competitions so far this season and scoring two goals. Napoli have conceded a total of five goals so far this season.

For the back line, Wednesday’s clean sheet was ultimately all that mattered, although early in the game the defense did look a little clumsy. In fact, the Scottish side were able to hold Napoli off throughout the first hour, and it wasn’t until Rangers defender James Sands was sent off in the 55th minute that the visitors were finally able to break through.

With the win, Napoli climb up to first place in Group A with six points, followed by Ajax with three points, Liverpool with three points and finally Rangers with zero. Ajax had topped the group on goal difference after the first round, when Napoli beat Liverpool 4-1 and Ajax beat Rangers 4-0, but Ajax lost to Liverpool on Tuesday, 2-1.

Kim is one of two Koreans currently active in the Champions League, alongside Son Heung-min of Tottenham Hotspur. Spurs are currently in second place in Group D, having lost 2-0 to Sporting Lisbon on Tuesday but beaten Marseille 2-0 a week earlier.

Sporting lead that group with six points, followed by Spurs and Eintracht Frankfurt on three points each with Tottenham edging out the Bundesliga club on goal difference. Marseille trail in fourth place.

After this weekend’s games, both Kim and Son will fly back to Korea to join the Korean national team for two upcoming friendlies, against Costa Rica on Sept. 23 and Cameroon on Sept. 27.