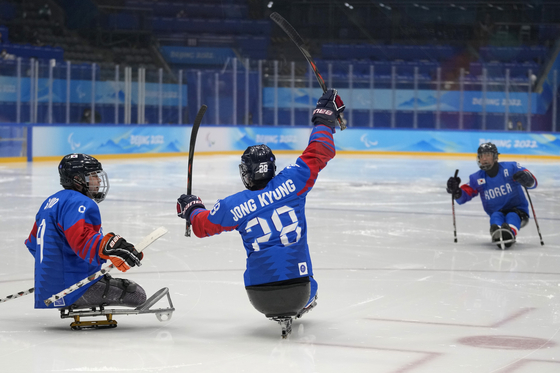 Korea’s Lee Jong-kyung celebrates with teammate Choi Si-woo after scoring a goal against Italy during a para ice hockey qualifying final match at the 2022 Winter Paralympics in Beijing on Wednesday. [AP/YONHAP]


Korea’s para ice hockey team beat Italy 4-0 in the first game of the knockout stage at the 2022 Beijing Paralympics on Wednesday, earning a spot in the semifinals and a serious shot at defending their bronze medal from the 2018 PyeongChang Games.


The Korean team got off to a quick start at the National Indoor Stadium in Beijing on Wednesday, with Jang Dong-shin scoring to take a 1-0 lead in the third minute of the first period. Jung Seung-hwan added a second goal for Korea in the second period, with Lee Jong-kyung and Jang cementing that lead in the third period.

Korea’s win was as much thanks to impressive goal keeping from Choi Hyuk-jun and Lee Jae-woong as it was the offensive performance of Jang and the other forwards. Italy had nearly as many shots as Korea, with 15 to Korea’s 17, but Choi and Lee Jae-woong were able to save every single one.

The win against Italy was Korea’s first victory at the Beijing Paralympics, despite the team having progressed through the group stage into the knockout round.

Korea competed in Group A at the Paralympics alongside Canada and the United States. The group was also supposed to include Russia, but the country has been banned from competing following the invasion of Ukraine. With the top three teams from each group advancing, Korea reached the knockout stage despite losing both its group games.

With the two groups separated by ranking — Group A contains the top-ranked teams in the world, while Group B contains teams No. 5 through 8 — the order in which they progressed to the knockout stage also differed. As the top two teams in Group A, the United States and Canada progressed straight to the semifinals.

Korea, as the third team in Group A, joined the top three teams from Group B — China, the Czech Republic and Italy — in the qualifying finals.

With the win against Italy, Korea now advance to the semifinals where they will once again face Canada on Friday.

Korea lost 6-0 to Canada in the group stage in a tough game that saw the Korean team only get off four shots to Canada’s 42. While Korea will be looking to avoid a repeat of that performance on Friday, even a loss will still send Korea to the bronze medal game.

On the other side of the bracket, the United States will take on China on Friday.

China, currently ranked at No. 9 in the world, topped Group B with three big wins, conceding only two goals in the group stage. The qualifying finals was much closer, with China holding the Czech Republic to a 4-3 win.

Assuming the world No. 1 United States is able to continue their impressive form against China and Korea is unable to beat Canada, Korea and China will then face off in the bronze medal game on Saturday evening. If Korea manages to beat Canada and reach the final, that game will be played on Sunday.