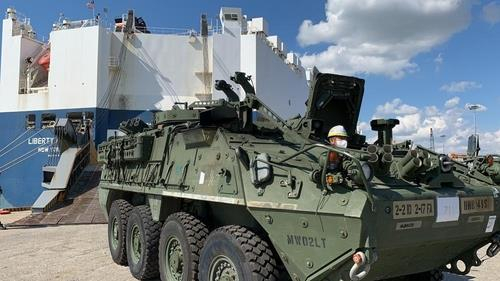 The main mission of U.S. ground forces in South Korea in case a war breaks out with the North will be to eliminate weapons of mass destruction in North Korea.

South Korean government sources exclusively told the JoongAng Ilbo on Tuesday that Washington relayed its shift in priority to Seoul earlier this year.

In the past, the core mission of U.S. ground forces stationed in the South was to repel North Korean aggression alongside South Korean troops.

According to multiple government sources who spoke with the paper on the condition of anonymity, Washington broke the news to Seoul before the end of June as it was explaining the major tasks of the Stryker brigade combat team (SBCT) ahead of the team’s arrival in Korea.

Washington was said to have told Seoul that in case of war, the SBCT would be directed to infiltrate North Korea to eliminate its weapons of mass destruction such as nuclear weapons; help evacuate over 200,000 American citizens from the Korean peninsula; and reception, staging, onward movement and integration, also known as RSOI, which refers to the process of transforming personnel and equipment into mission-capable forces.

After that explanation, the U.S. Department of Defense announced on June 30 that beginning in the fall, the Korea Rotational Force will transition from an armored brigade combat team (ABCT) to an SBCT, adding that the transition was meant to “enable the U.S. to maintain capabilities on the Korean peninsula to rapidly respond to any acts of aggression.”

“The SBCT is an infantry-centric unit with over 4,400 Soldiers who offer speed, efficiency, increased mobility and strategic flexibility to senior commanders,” the Defense Department statement read.

“The existing ABCT equipment, which includes M-1 Abrams tanks and M-2 Bradley Fighting Vehicles, will be maintained on the Korean peninsula in a ready state to further ensure a robust defense capability.”

The SBCT started arriving in Korea from Oct. 7 and is scheduled to officially assume responsibility as the 12th rotational brigade to Korea during a transfer of authority ceremony on Nov. 9.

But even as Washington stressed its commitment to South Korea, some experts express doubt about the SBCT’s role, saying that it appears the United States is actually weakening its military presence on the peninsula by replacing a team best known for war tanks with one that’s mainly equipped with armored carrier vehicles.

“The U.S. is a country that projects its military force throughout the entire world,” said Park Won-gon, a North Korean studies professor at Ewha Womans University, “so the Korean peninsula isn’t the only thing that’s on its mind.”

Park said the U.S. might be focusing more on containing China while pressuring the South to contribute more to the allies’ defense of the peninsula.

The transition of the Korea Rotational Force comes as Pyongyang has been raising tensions by launching ballistic missiles, firing shells into maritime buffer zones and crossing the Northern Limit Line, the de-facto inter-Korean sea border in the Yellow Sea.

South Korean government officials have for months warned that a seventh nuclear test from Pyongyang could come any time.