Asean textiles in spotlight at exhibition

Asean textiles in spotlight at exhibition 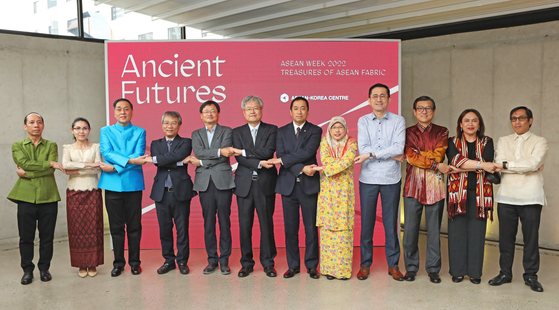 Kim Hae-yong, the secretary general of the ASEAN-Korea Centre, sixth from left, and ambassadors of the Asean member states in Korea celebrate the opening of the Asean Week 2022 at Cociety in Seongsu-dong, eastern Seoul, on Wednesday. [PARK SANG-MOON]

Asean-made fabrics that have inspired Jimmy Choo, Loro Piana and Cong Tri, and are admired by some K-pop stars like Rosé of Blackpink, will be shown at Asean Week 2022, hosted by the ASEAN-Korea Centre in Seoul starting Thursday.


“The exhibition will showcase the delicate and sustainable fabric items made by Asean master artisans … [that are good examples of] traditional weaving craftmanship that has been passed down through generations,” said the center in a statement on Wednesday.

Held at Cociety in Seongsu-dong, eastern Seoul, through this Sunday, the exhibition features examples of Pua Kumbu, or patterned ceremonial cotton used in Malaysia, which is known to have inspired Jimmy Choo’s shoe collection; several types of the so-called Lotus fabric from Myanmar, known to have been used by Italian apparel brand Loro Piana; as well as examples of Lanh My A Silk, called the queen of Vietnamese silk. It is used by Vietnamese Designer Cong Tri, whose designs have been worn by K-pop star Rosé of Blackpink.

Hosted annually by the ASEAN-Korea Centre in Seoul since 2019, the special week focuses on the cultures and tourism resources of the 10 Asean member states. The center is an international organization promoting economic and socio-cultural cooperation between Asean member states and Korea.

The event was supported by the Foreign Ministry in Seoul and the National Tourism Organizations of Asean.