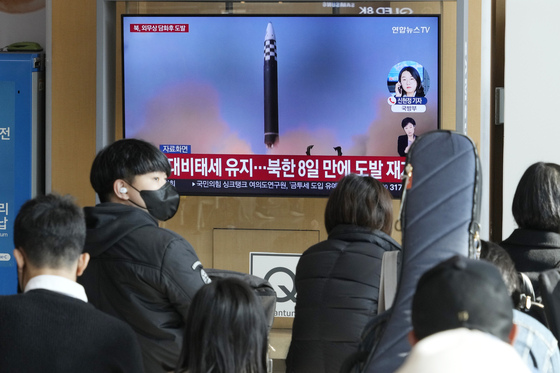 
North Korea delivered a stern warning to the United States and its allies on Thursday morning, and then fired a missile into the East Sea.

“The keener the U.S. is on the ‘bolstered offer of extended deterrence’ to its allies and the more they intensify provocative and bluffing military activities on the Korean peninsula and in the region, the fiercer the DPRK’s military counteraction will be,” North Korean Foreign Minister Choe Son-hui said in a statement carried by North’s official Korean Central News Agency (KCNA).

DPRK is the acronym for the North’s official name, the Democratic People’s Republic of Korea. The statement was in English.

Extended deterrence refers to the U.S. commitment to utilize its full range of military assets, including nuclear weapons, in defense of allies.

Choe’s comments come just days after the leaders of South Korea, the United States and Japan met in Phnom Penh and issued a statement promising “a strong and resolute response from the international community” to missile launches and nuclear tests by North Korea.

They also agreed to share real-time information on North Korea’s missile launches and pledged to coordinate on the implementation of international sanctions, while leaving open offers for dialogue, urging Pyongyang’s return to denuclearization negotiations.

The United States reiterated its “ironclad” commitment to the defense of South Korea and Japan and said that all its capabilities, including nuclear weapons, would be available to back its commitment to “reinforce extended deterrence.”

“The recent tripartite talks will finally result in bringing the situation on the Korean peninsula to an unpredictable phase,” Choe was quoted as saying by the KCNA.

She defended the North’s missile launches as “legitimate and just military counteractions” to recent drills military drill held by the United States, South Korea and Japan.

“The U.S. will be well aware that it is gambling for which it will certainly regret,” she added.

Her statement did not elaborate on what actions the North would take.

Choe previously served as director general of North American affairs at the North’s Foreign Ministry and has been a key figure in leading denuclearization negotiations. 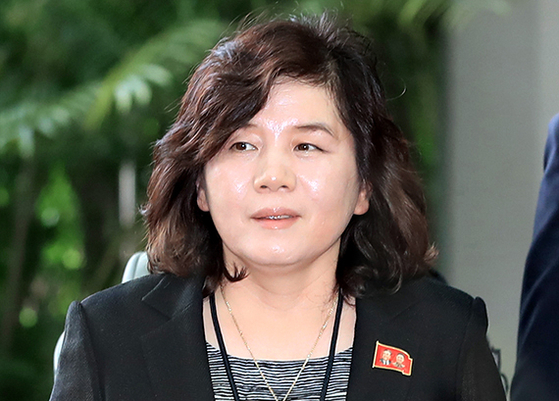 North Korea fired one short-range ballistic missile (SRBM) from Wonsan in Kangwon Province at 10:48 a.m. into the East Sea, South Korea’s Joint Chiefs of Staff (JCS) said on Thursday. The missile flew around 240 kilometers (149 miles) and reached an apogee of 47 kilometers and a top speed of Mach 4.

Seoul’s military said it was maintaining a “full readiness posture” in close coordination with the United States and strengthening surveillance.

Seoul and Washington staged a combined missile defense drill involving Aegis destroyers earlier Thursday morning ahead of the North’s missile launch. The drill was “planned in advance,” the military said.

Analysts said that the latest SRBM could have been a KN-23, similar to Russian Iskander missiles, or a KN-24, similar to the U.S. Army Tactical Missile System (ATACMS).

“North Korea’s consecutive ballistic missile launches are a grave provocation that undermines peace and stability on the Korean Peninsula, as well as the international community, and is a clear violation of UN Security Council resolutions,” the JCS added in a statement.

Pyongyang’s missile launch comes eight days since its last launch. On Nov. 9, it fired an SRBM from its South Pyongan Province into the East Sea.

This was its longest break from missile tests since Sept. 25.

In Bali Monday during the G20 summit, U.S. President Joe Biden told Chinese President Xi Jinping that Beijing has “an obligation” to dissuade Pyongyang from nuclear tests and that Washington would take “defensive” action “to send a clear message to North Korea.”

On Tuesday in Bali, President Yoon Suk-yeol asked Xi to play a more “active and constructive role” in dealing with North Korea’s nuclear and missiles threats.

On Wednesday, the UN General Assembly’s Third Committee in New York approved by consensus a resolution condemning North Korea for human rights violations. It was the 18th consecutive condemnation.

Kim Song, North Korean ambassador to the United Nations, flatly rejected the resolution as “a grave infringement of the sovereignty” of his country and called it a “political plot” aimed at destabilizing Pyongyang.